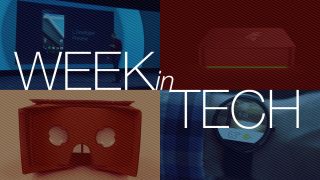 This week was all about the big G. Not the big G that lives in the sky - we mean the slightly less omniscient one that lives in the cloud. The annual Google IO brought us the future of Android, some whizzy watches, a brand new TV box and, er, a cardboard hat. It's a Googly week in tech!

Google IO is Google's equivalent of WWDC, an annual event where developers get to see what's next in smartphones, computers, entertainment and wearables. The keynote address was a bum-numbing three-plus hours, but we've boiled down the key information into a much more comfortable five points. Here are the five things you need to know about Google IO 2014.

An L of an Android

Android 5.0, previously predicted to take the name Lollipop, is now Android L - and it's going to be an L of an upgrade. As Gary Cutlack explains, there are "a lot of new features, big visual changes and clever tweaks [to] get excited about." From the pretty new look to better battery life, here are the 10 big things L has to offer.

The Moto 360 is currently the world's most wanted smartwatch, and it's by far the most desirable of the Android Wear devices we've seen so far. But how does it compare to its similarly droid-powered rivals, the LG G Watch and the Samsung Gear Live? The Gear Live is the cheapest, but the 360 is the more attractive.

The future of virtual reality is… cardboard! Where previous Google IO attendees got all kinds of electronic goodies, this year's delegates got a smartwatch and a bit of cardboard. But Google Cardboard is no ordinary cardboard. It's cardboard that records everything you do and… no, not really. But it does turn your Android phone into a VR headset for 99.9% less than an Oculus Rift or Project Morpheus. Just don't try to use it in the rain.

The newly announced Android TV is Google's third attempt at transforming television. Will this one work, or is it the new Nexus Q? Michelle Fitzsimmons has the remote: "It already seems more refined than the failed Google TV venture," she says, but it's "somewhat uninspired" - although Razer's Android TV "micro-console" looks pretty nifty in an Amazon-y, Apple-y kinda way.

Android isn't a huge deal in business - almost all business tablet activations are currently iOS, not Android - but that may well change with Android for Work. Why take two devices into the office, Android for Work says, when you can just have one? It promises to keep work and personal stuff separate on a single device, and combined with Android apps on Chromebooks it could help Google make a much bigger dent in the business universe.

Google Glass for a grand

Google Glass has a UK price tag - a ridiculous £1,000 - and a spec bump: the memory has doubled and there are 12 new apps including Shazam and Live Stream. Is it worth the money? Of course it isn't, but as Matt Swider says, owning one is rather like "owning the first TV on the block". It's "more fun than functional right now," but it certainly gets you noticed.