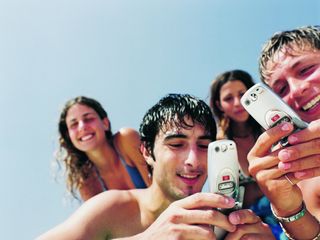 Vodafone could decide to drop its roaming charges altogether if its three month promotion goes well.

The news that Vodafone was scrapping its set up fees for texting and calling abroad has been met with excitement from consumers eager to tell all their friends just how happy and warm they are and TechRadar spoke to Ian Shepherd, Director of Vodafone UK, to find out more.

"The underlying reason behind this scheme is to draw attention to Vodafone Passport [where users can opt in for free and pay a set-up fee for each call, with the conversation then governed by their UK price plan] which 22 million people already use worldwide.

"With this promotion we're waiving that set up fee. Vodafone Passport is way ahead of the regulations [set by the EU against roaming charges] and we're showcasing that and the fact that it's free to opt in.

"If you're going to do a promotion like this, summer is the time to do it, and we're hoping to get those [Vodafone customers] that don't have Passport to join it, as well as enticing new customers."

When pressed on whether this scheme will be extended if take up is strong, Shepherd confirmed it is still up for discussion:

"We've just launched the promotion, and we're going to see how it goes. We're hoping many opt in to Vodafone Passport, so we'll make a judgement [on dropping the charges altogether] in the future.

The EU has been vocal in recent months about capping prices for mobile use abroad, but Shepherd thinks that Vodafone is well ahead of the game in that respect, despite being the subject of multiple stories with customers getting hit with £10,000-plus bills for using data abroad.

"The regulation charges [from the EU] are not really relevant to this promotion. We have a standard regulatory tariff, but Vodafone Passport is miles better, and with this three month promotion it's better still."

Ahead of the game

Shepherd continued: "We're continually ahead of the regulations, but the decision to run this promotion is not driven by the regulations but competition.

"The mobile market in the UK is very competitive, Vodafone Passport is great value, and one of a series of initiatives we'll be launching this summer.