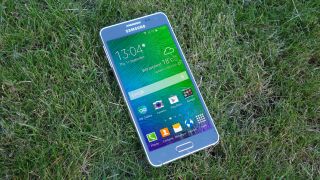 The Samsung Galaxy Alpha represented the South Korean manufacturer's attempt at a more premium handset design. It brought in a metallic frame in order to shed the "plasticy" criticism levelled at earlier phones and give it a means of competing against the likes of the HTC One M8 and iPhone 6.

Today, Corning has revealed that its recently-revealed Gorilla Glass 4 is, in fact, used by Samsung's Alpha handset. Yeah, the one that launched back in September.

The (now not so) new version of Gorilla Glass is, the company says, the most damage-resistant cover glass to date and is the reason Samsung was able to get the Galaxy Alpha handset down to only 7mm thin. The actual sheet of Gorilla Glass 4 atop the Alpha's 4.7-inch Super AMOLED display is only 0.4mm thick.

The company claims that Gorilla Glass 4 can survive 80% of drops from a height of 1m onto rough surfaces. Further, it's twice as strong as rival glass displays. So if you've been impressed that the screen didn't crack each time you dropped your Samsung Galaxy Alpha, you now know why.

Of course, with such secrecy now revealed, there's no telling to what end Corning has infiltrated Samsung. The Galaxy Note 4 for instance? Or potentially the upcoming Samsung Galaxy A5 and A7?