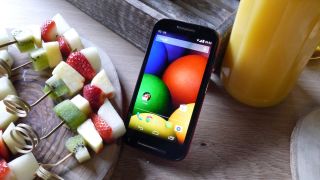 Could be a perfect second phone

The Motorola Moto E played second fiddle to the popular Moto G, offering a relatively strong set of specs at an entry level price - and now it's back for a second term.

Spotted on the website of US retailer Best Buy before it was quickly taken down, the second generation Moto E builds on its predecessor with 4G connectivity, a larger 4.5-inch (540 x 960) display and a 1.2GHz quad-core processor.

There also appears to be a new front facing camera, although only VGA in quality, to compliment the 5MP snapper on the back, while internal storage gets a boost from 4GB to 8GB - plus there's still a microSD slot.

Move on screen and there's more good news as it appears the Motorola Moto E (2015) runs Android Lollipop out of the box, giving you the freshest version of Google's operating system.

More for your money

There's no word from Motorola on when we'll see the new Moto E officially, but given the scale of the leak we shouldn't be waiting too long.

From Android Police via PocketNow