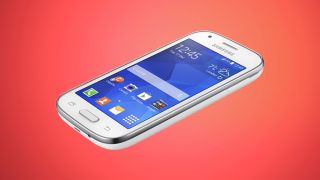 Very Galaxy, but where's the style?

Samsung's newest phone is the Galaxy Ace Style which, despite the name, doesn't seem any more stylish than the company's other handsets.

But according to the press release it's designed for "young, expressive types" - apparently what that translates to is a phone with a simplified user experience relying on Samsung's TouchWiz interface, a 1.2GHz dual-core processor, 512MB of RAM and a 4-inch WVGA screen.

So, if anything, this is at the mid-to-low end of what you'd expect from a smartphone.

Rounding out the specs there's a 5MP camera, 4GB of internal memory, a microSD card slot and a 1500 mAh battery, though it does at least come with Android 4.4 KitKat and have NFC support.

All about the youth

Given the specs, when Samsung says young it presumably means kids, so maybe the Ace Style will end up going head-to-head with Samsung's own Galaxy Young for that segment of the market.

Whether or not it's even slightly interesting will largely depend on the price. There's no sign of a pricetag just yet, but it'd have to be around AU$150 if it wants to turn heads when it launches.

As for the launch date, that could be as soon as this month, though exact availability hasn't yet been confirmed.