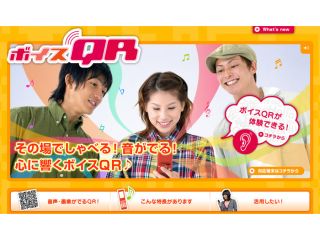 Because Japan loves a jingle

Like many Far-Eastern technologies, Japan's QR Code gets attention in the West more for being exotic than for any real benefit it brings, so we fully expect the latest all-singing version of the 2D barcode to follow suit.

A consortium of three companies has decided to improve on the usual URL-carrying QR Codes, by tweaking the data in each black and white square to contain a brief snatch of audio and a simple image.

Otsukare, as they say in Japan

The Voice QR, as it's called, simply needs to be scanned with the camera on a mobile phone for it to give up its hidden treasure without the need to connect to a website.

That might be a squeaky voice saying "Hello," "Well done on getting into college," or "Thanks for your hard work." At least that's what the examples we saw are capable of.

Quite why anyone would need any of this cumbersome technology to deliver a facile automated message, it's limited to two seconds, is beyond us, but the grinning ninnies on the product website seem to be ecstatic beyond measure.

The consortium sees Voice QR Codes delivering multi-media jingles from posters, books and product packaging. For that to happen, it will have to persuade mobile phone makers to install software that understands the new kind of QR code – currently, only seven handsets are capable of doing so.