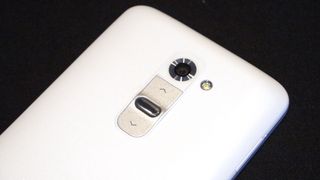 It's no secret that the LG G Pro 2 will be launched at MWC 2014 in Barcelona, and now the Korean firm has spilled the beans on the handset's camera.

Taking to its official social site, LG confirmed that the G Pro 2 would sport "OIS plus" technology on the rear facing 13MP snapper.

The post notes that the camera gets a revamped interface, as well as slow motion and Ultra HD (3840 x 2160) video recording.

Round the front of the G Pro 2 you'll find a 2.1MP snapper - the same camera which is found in the flagship LG G2.

TechRadar will be out in force at MWC 2014 to bring you all the latest from the Korean firm, including a hands on LG G Pro 2 review.