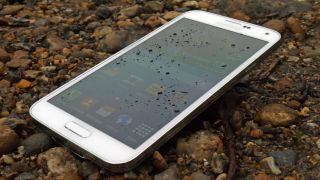 Is the Galaxy S5 not enough?

Rumours surrounding a super high-spec premium version of the Galaxy S5 are refusing to go away after a new report points towards a possible June launch for the Samsung Galaxy S5 Prime.

According to Asia Today the Galaxy S5 Prime will be arriving soon. The key difference between the S5 Prime and the original is the former is rumoured to sport a crystal clear QHD display with boasts a resolution of 1440 x 2560, as well as a new chassis material.

We're already impressed by the 5.1-inch, 1080 x 1920 display on the Galaxy S5 so if this rumour does transpire to be correct your eyes may be in for a real treat.

Not just a screen

Previous rumours have suggested the S5 Prime will turn up with a full metal chassis as Samsung looks to bridge the gap between its S and Note series.

Samsung hasn't provided any hints towards the possible existence of the S5 Prime, but with LG hotly tipped to launch the QHD LG G3 soon it's not totally out of the question its Korean rival will try and steal the show.