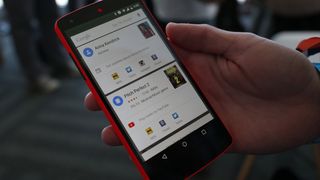 One of the biggest changes that will be ushered in with Android M will be how we browse and launch the apps on our smartphones, and if you're excited to try the new launcher you can already install it on Android KitKat and Android Lollipop devices.

In a YouTube video, Tim Schofield from QBKing77.com demonstrates how to get started. You'll first need to download and install the Google Now Launcher from Google Play.

Once that's installed you need to download a file named Velvet APK and install it (you may need to check "Unkown sources" in your device's settings), and then load up the Google Now Launcher.

It's all pretty straightforward and doesn't take long at all to get the Android M launcher working. The main difference between the new launcher and Android's previous launcher is that you scroll through your apps vertically, instead of horizontally.

You now get recommended apps at the top as well, which could make finding your favourite apps a lot easier.

Although it is simple to install, a word of warning: if you want to remove the Android M launcher and revert back to your older way of doing things then you might need to factory reset your device, which will make you lose your files and settings.

So only install the launcher if you're sure you want to keep it. If not, it'll be better to wait for the official launch of Android M – though that also might mean you're stuck with M's new way of doing things.