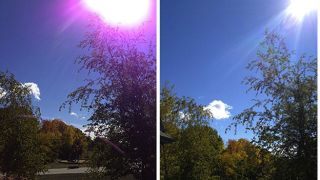 Purple haze, all in my brain...

The purple flare that appears on some iPhone 5 camera shots is perfectly normal, according to Apple.

A Gizmodo reader complained to Apple about the purple fringing that was appearing on his shots, and received a response from AppleCare representative 'Debby', who told him it was perfectly normal behaviour.

"Dear Matt," the response reads. "Our engineering team just gave me this information and we recommend that you angle the camera away from the bright light source when taking pictures. The purple flare in the image provided is considered normal behaviour for the iPhone 5's camera."

But Apple hasn't been consistent on the matter. One user complaining in a thread on Apple's Support Communities webpage was offered a new handset in return for his old one. Though it's not known if Apple will make good on this promise for all affected.

This purple fringing was suspected to be caused by the new sapphire lens cover found in the iPhone 5. But it's more likely a normal distortion of light caused by a chromatic aberration. This skews towards shorter wavelength violet light, which is tricky to correct with larger prime lenses, let alone the smaller ones found in the iPhone 5.

Apple marketing supremo Phil Schiller previously responded personally to another iPhone 5 owner who complained of scuffing on his black handset. Schiller replied that the marks were to be expected.

"Any aluminium product may scratch or chip with use, exposing its natural silver colour," he wrote. "That is normal."