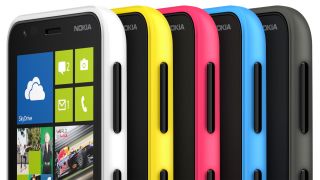 Is Nokia adding a tablet to the smartphone spectrum?

We may have just been given a glimpse of the Nokia Lumia tablet after an intriguing image appeared at the launch event for the Lumia 620 in Pakistan.

The snaps were taken by the crew over at Sense Applied who were present at the event, and gives further evidence towards theories suggesting Nokia is working on its first ever tablet.

In true leaked shot style the quality of the snap isn't all that great, but you can make out a tablet in between a Lumia 620 and a television set.

Round round baby, round round

On the tablet's display is the Windows 8 start screen with various live tiles displayed, while the Lumia tablet itself sports rounded corners and the vibrant yellow finish which we've seen on many of Nokia's Windows Phone 8 smartphones.

There have been rumours suggesting that Nokia is looking to branch out from mobile phones into the tablet arena and although the Finnish firm is staying tight-lipped on the subject it wouldn't be a huge surprise is we saw a slate bearing its name in the near future.

Assuming it exists, the Nokia Lumia tablet could even make an appearance at MWC 2013 in Barcelona at the end of the month and TechRadar will be in attendance just in case it does.