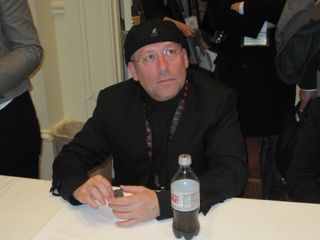 Intel is serious about making inroads in the tablet and smartphone markets. That's according to Mooly Eden, Head of the PC Client Group at Intel, who TechRadar met with after the chip manufacturer's presentation at CES 2011 today.

"We're serious about this category. We're designing great low power in microprocessors. You'll see it start to ramp. It will be much more meaningful in 2012, we've got a whole team working on some great solutions. Another category we're dead serious about is smartphones."

During the earlier keynote, Intel CEO Paul Otellini said the corporation would present smartphone announcements at next month's Mobile World Congress in Barcelona.

So far Intel has struggled to make inroads in these two markets as it competes with the low power, low heat ARM-based processors found in almost all mobile phones and tablet devices such as the iPad - but it will be interesting to hear what it has to say next month.

Eden certainly believes tablets are a category to be reckoned with.

"Tablets are here to stay," he added, who said he sees tablet devices as "a mainly complementary device rather than replacing the notebook." He said that people simply could not give up their notebooks for serious work, citing the example of a journalist who was taking notes on an iPad, but who still had a notebook in his bag.

Eden also believes the tablet fuss is a short-term thing. "I believe in the future the big hype will be over and it will just be another category complementing [the PC]."

"At the moment, it's the new kid on the block."