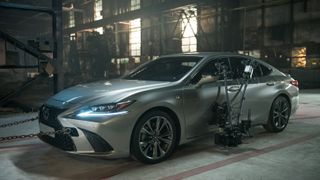 Is there such a thing as the perfect advertisement? We’ve all got our own personal favourites, but Japanese car manufacturer Lexus has taken things up a notch or two by scripting its latest advert using artificial intelligence. And where better to unveil this unorthodox idea than during London’s Social Media Week activities held at the Queen Elizabeth II Conference Centre (QEII) recently, just across from Westminster.

The commercial, Driven by Intuition, is being used as part of the launch campaign for the new Lexus ES executive saloon and was shot by director Kevin Macdonald, whose credits include The Last King of Scotland and the Whitney Houston biopic Whitney. That was the organic part of the process, whereas the storyline itself along with the script was concocted using AI in a collaboration between technical partner Visual Voice, IBM and creative agency The&Partnership.

The end result is an interesting mix and match of ideas, which is hardly surprising as the production process involved the use of IBM’s question-answering computer system Watson to crunch a mountain of data that included 15 years of award-winning luxury adverts. From that, the system was able to construct the framework of the commercial and distill what was needed as the vital ingredients for creating the ‘perfect’ car advertisement.

That might sound a bit crazy, but this mash-up of ideas kind of works, much to the relief of all concerned as the bold move is seemingly at odds with much of the Japanese ethos. For director Macdonald the 60-second film was initially a curiosity, but he was lured in by the quirky nature of the project. He’d initially been asked to have a look at the idea on a consultancy basis.

“I was quite skeptical that the computer would write something good, that would make sense,” he says. “In the back of my mind I thought we would end up having to rewrite it. But what came out is what you see.

“A lot of the script was described in great detail too,” adds the director. “It was very different to the way I’d direct something normally. It was an interesting experiment, which is why I did it, one of the first things written by a computer. The thing that struck me most was the AI had written a script about being a machine that’s trying to come alive. It was quite surreal.”

Macdonald says it made him think of Pinocchio and Frankenstein. “You’ve got the Takumi, the Japanese craftsman who’s making the ‘puppet’ whose got to go out into the world, but who doesn’t really understand that world. There was something kind of touching about that. It’s surprising that the computer came up with something quite so full-bodied and emotional. If it had been written by someone at the agency then it would probably have come across as too sentimental, with the tears and the hugging.”

Oddly enough, Macdonald was inadvertently put in quite a good position because ultimately he could always turn around and say to people that the computer told him to do things the way he did. “When you’re making a film there’s that pressure on you because you’re spending peoples money. This was fun because you’re just doing what the computer is telling you to do. It actually made it a much more relaxed and fun shoot than a normal film project.”

The director says that initially there had been approaches to more conventional car advert directors and most had been too scared of the concept. So in the end they asked Macdonald to direct and he decided to go for it. “I thought it seemed like fun and was a bit unusual, whereas a lot of people didn’t really understand it. I think they were worried about something that might not have worked in the conventional sense. To me it was an adventure.”

“I think it was a bold thing for Lexus to do because it really is an experiment,” adds the director. “I’m sure they’re not going to go on and do every ad that they do like this, but I think it obviously makes a certain degree of sense when you see what they’re trying to communicate about these cars with man and machine working in harmony. To create a commercial that was written by a machine and directed by a human being… there’s something rather nice about that as an idea.”

Michael Tripp, Lexus general manager, quips that when he first saw the footage he thought it might have gone a little too far. The ad is certainly offbeat, thought-provoking and, in many ways, full of contradictions for a Japanese luxury car brand. A good example of this is the tearful Takumi bidding a solemn farewell to the car.

“The initial reaction was interesting,” he says on showing it for the first time to the Lexus bosses over in Japan. “But I think the beauty with this company is that they trust us in our discipline to try and push boundaries without stopping us along the way.”

Alex Newland and Will Nutbrown, the AI developers from Visual Voice look both pleased and a little bit relieved that the commercial has turned out as well they’d hoped for.

“IBM turned out to be a really great partner for this because what AI relies upon is having lots of training data,” says Nutbrown. “So before it can do anything it has to be shown many hundreds of pictures of cars and bicycles and roads to know what they are. That is really only economical for a large organisation like IBM or Google to spend hundreds of thousands of dollars doing that kind of training exercise.”

With only around three months to play with the team didn’t have time on their side either. Which is where having the ability to locate the best tools for the job, in this case IBM’s Watson, allowed them to work smart. “If you’d started this from scratch as a brand new platform then obviously that would not have been possible,” says Newland. “But we’re in this brilliant exciting place where there are lots of people out there doing really great work and that enables us to integrate all sorts of technology to get us to the place we need to be.”

However, after analyzing all of the subsequent data, Newland explains that they realised they were in danger of producing a very dull, formulaic car advert, which wasn't what anybody wanted to do. “It’s a luxury brand, so we also looked at Burberry, Louis Vuitton, Mulberry and analyzed that data too, which allowed us to look at things another way.”

One of the most interesting things that also came out during the research, which included a study that was commissioned in collaboration with MindX; the applied science division of the University of New South Wales, was the inherent need for emotion. “Although there are things in the advert that are unusual,” says Nutbrown, “and don’t necessarily gel together, they do stimulate an emotional response, which I think is what the AI was attempting to do.”

“I think that was the thing – the machine told us that it wanted to see the Takumi cry,” notes Newland. “Now, culturally, Takumis don’t cry. And I don’t think there are many engineers who cry when they see their cars leave the factory. So that was one thing that left the Lexus people feeling a little bit uncomfortable. But because this whole thing was about being as true to the output as we could be they were brave enough to go with that.”

Did they succeed? Well, take a look for yourself. Following the premiere the film was released across digital, social and cinema channels in Europe to herald the launch of the all-new ES executive saloon early next year.

The launch of the Driven by Intuition advertisement formed just one part of the 9th Annual SMW London Social Media Week activities. A whole raft of talks and networking events covered everything from AI versus Humanity through to Future Tech and all points in between. But, it was that slightly bonkers AI-scripted commercial that really got people talking.