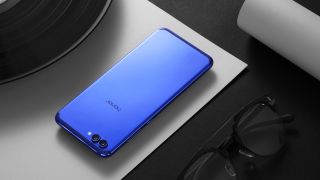 Honor has announced that it will launch a new flagship smartphone on January 22, 2019, with the Honor View 11 the most likely name for the new handset.

The launch event will take place in Paris, France and Honor revealed some details about the phone alongside the invite we were sent.

First up, the invite itself gives us a clue to one feature of the Honor View 11, with a pinhole camera design teased through the outline of a handset with the moon sneakily placed in the top left of the phone.

It suggests that the front-facing camera will be completely surrounded by the screen, rather than being located in a notch which cuts into the side of the screen - it's similar to the rumored Huawei Nova 4 which is due to launch on December 17.

However, Honor's claim that it "will be the first to demonstrate the in-screen camera display" may be false if the Nova 4 rumors turn out to be accurate.

Unlike the Huawei Nova 4 - which is tipped to be a mid-range phone - the new Honor View 11 is set to be a flagship device with the firm confirming the "upcoming device is equipped with the advanced Kirin 980".

That's the same chipset that you'll find in the Huawei Mate 20, Mate 20 Pro and Honor Magic 2 - a trio of flagship smartphones which all launched in November 2018.

The timing of the Honor View 11 launch event ties in nicely with the phone it's set to the replace, as the Honor View 10 was launched in December 2017, and went on sale in January 2018.

The View 10 packed in a 5.99-inch display, a top-end chipset, 6GB of RAM and dual rear cameras, so that's the minimum we expect from the Honor View 11.

TechRadar will be reporting live from the Honor View 11 launch event in Paris on January 22 to bring you all the latest on this new handset right here.