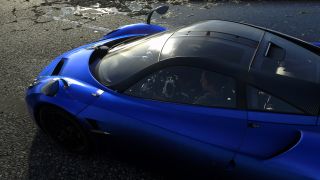 We're hovering just above the clouds as the sun sets over India. Each whispy formation is impressively lifelike but you'll probably never see any of this. Why would you? You'll be tearing around the racecourse below at 150mph, worried about how you're going to shave that fraction of a second off at the last corner. And yet, to Evolution Studios, the fidelity of each cloud is as important as the horsepower of the every one of its 50 cars.

Thinner air creates different sunsets, so the higher you are, the more different it looks. It's an incredibly minute detail for a racing game, but one that perfectly demonstrates how Driveclub dares to be different. Oh yeah, and did you know that sunlight will scatter through the windscreen differently if there's dirt on the glass?

As Alex puts it, "The macro feeds into the micro, which feeds back again." This, finally, might be the next-gen experience we've been waiting for.

Evolution has had a lot of time to get things right with Driveclub. When the game was delayed so its 'dynamic menu' could be improved every other department was handed a big fat time bonus. More wax and polish meant the shiny could get even shinier, the sounds even more authentic, and the handling more attuned. When you're just about ready to ship, 12 months is an awful lot of extra time.

But to build the best-looking racer ever made, Evolution needed to treat the cars as just a small part of the bigger picture. It wanted environments that were live and dynamic: no pre-baked lighting, no cardboard cut-out crowds. "Shoot it as if you're shooting a film," says Alex.

So that's exactly what Evolution did. "We developed our own technique for going out to do real-world capture," he says. "We had to extract all direct light source, and we had to hide the sun from any photograph we took and then control where the light came from so we could reconvert it… it required us to look rather silly hidden underneath blankets all over the planet."

That referencing wasn't just for the cars and the odd road, but for just about everything. "We were climbing trees and taking sections of trees out and then photographing them in the same conditions on location". Driveclub puts gamers on tracks in Canada, Chile, Scotland, India and Norway, every one of them captured on location.

"If you know these parts of the world, you'll recognise these roads," says Alex. "I've noticed Neogaf has pretty much nailed some of the locations that we've done within 20 kilometers, even though [we put no] information out there."

India was a particularly tough nut to crack. The team needed to know how light would reflect off every different type of plant in the area, but much of India's plantation isn't indigenous. "We actually ended up spending an afternoon with a botanist to work out what was going on in the jungle, get lots of reference for all the foliage, make sure we had a decent sense of how they all lit," Alex says.

"In the tea plantations themselves, the level of detail goes down to a single leaf. [We] even scatter the light through the leaves so you get different colours on the backsides to the frontsides. You get transmission through the leaves and that goes for every tree all the way through the entire level that's done to everything. There's no special shader just for the ones close to the track."

Wind speeds vary, cloud thickness is forever changing, altering the sun's cast. It's these meticulous details that will set Driveclub apart from its peers. But what's it all for? Surely the last thing on anyone's mind is going to be how good the backs of the tree leaves look. Just don't suggest that to Alex. He spent years researching the effects of "the micro" on the brain and is well prepared to retaliate.

"Your eye really isn't looking at that one centre spot. There's a blind spot about the size of your thumb in front of your eyes but you never notice it. Your eyes are taking in so much information continuously, and it all adds to that sense of speed, sense of location. Some of these point to points, when you're in the supercars doing 220mph in a straight line and there are 12 of you going, its scary and your heart races, and that isn't really achievable without this level of consistency."

Then Alex even gives us an interesting anecdote about how Chile's salt flats were designed. "We tried mimicking real salt but I ended up crushing corn flakes to make it look like a cracked salty surface, and then actually sampled that"

If you're going to get fussy about the way light diffuses through a leaf, sacrificing any fidelity in in the cars' audio would be criminal.

Up to 16 microphones were placed in and around each of the game's 50 cars to capture noise from both the inside and out. "Every fluctuation in the track, every bump, will affect how the engine oscillates," audio engineer Tim Shepherd tells TechRadar.

"It's absolutely one to one with physics, there's no intermediate layer. So what the physics are doing, what the tachometer says, is exactly what the audio produces."

Evolution has moved beyond the loop-based recordings it used for the World Rally Champion games and well past the arcade sounds of MotorStorm. "We still use loops but we use two other layers as well… we've gone full circle and back to making it sound as close as we can to the car."

First, second, third gear sweeps, held rev points - every audio detail of every car has been captured, 10 times more sample data than Evolution has taken on any game in the past.

"We got into so much detail that even BMW and Mercedes requested to have copies of the recordings to replace their own," Shepherd tells us.

Interestingly, the audio team realised that a lot of people won't know what these cars sound like in real life, but do watch YouTube videos. So when it came to audio fidelity, a balance was struck between internet clips of these vehicles and the real thing.

Having the right people to drive the cars was important too. Working on driving games in the past, the team found that people were less willing to push the boundaries of the cars that they owned. For Driveclub, Evolution needed drivers who were willing to go hell for leather. And you can bet that it found them.

Current page: The world at large