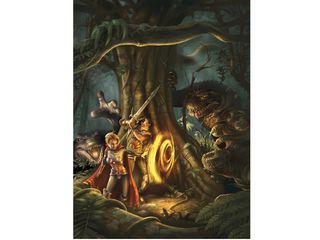 It only takes one bad player to spoil the party, as many Neverwinter Nights fans discovered

Everything's better with friends: going to the pub, hearing difficult news and taking on the massed demons of hell – you name it.

This probably says something about us as a species that while most of our favourite games are all about playing with others, it's typically spent trying to tear each other apart with fists of fury, hot lead, magical spells and anything else that might make a pretty splash of gore that has one yelling 'Damn!' and the other giggling 'LOL'.

Co-op is a different beast; one with the power to draw us together across continents and let us pool our fictional resources in the name of more social glories. If a problem shared is a problem halved, a shared victory is all the more glorious. Yet getting to that point is an uphill climb, for players, for developers and for the armies of baddies tasked with giving you value for your money.

This was literally true in the case of the earliest co-op games, as found in arcades all round the country. One of the earliest, and definitely the most famous, was Gauntlet – the top-down maze game where players took on the role of Warrior, Wizard, Valkyrie or Elf and hurled weapons at an endless stream of monsters, and personally punched anyone unlucky enough to accidentally shoot the potions and food they were supposed to be collecting. You could play Gauntlet on your own, but only if you wanted to play the most pointless game since Strip Patience.

Co-op bloomed in several genres, especially shooters and beat-em-up games – both of the Street Fighter mould, and the simpler Final Fight variety. Before Street Fighter 2 and its ilk turned everyone onto the joys of competitive gaming, co-op was one of the best ways for arcades to get between two and four times the money per game. That was just for starters.

With arcade games typically tuned to somewhere close to impossible difficulty, having a friend to spread the pain was the only way for most players to see the later levels of games like The Simpsons (a truly fine scrolling beat-em-up for its time), Contra, and Smash TV… or F***ing Smash F***ing TV, as it quickly became known among self-censoring gamers. Even on Xbox Live Arcade, the pain of that particular game still lingers.

All this was going on in the late 80s and early 90s, when the average arcade cabinet at the time was light years ahead of anything in the home computer market. If you wanted to play arcade quality games, only the Neo Geo offered anything close – but with games costing hundreds of pounds, most were content with their Nintendos, Spectrums, and those PC things that have been popular lately.

Many games made the jump from arcade to home computer, but co-op typically got lost in transition. Either the game would became single player only, or players had to take it in turns. Sequels, such as Double Dragon II, might restore it.

More often, co-op would be built into a new game from the start, letting the developers work with the system's limitations. Bubble Bobble, Battletoads, and Streets of Rage are just three examples.

Games would often let you choose whether your attacks would harm the other player or not. Gamers could usually be relied on to say 'yes' to a bit of friendly fragging.

The great irony for co-op games is that the same technology that gives computers the ability to create them is the reason we don't get to see very many games embrace multiplayer gaming in the first place.