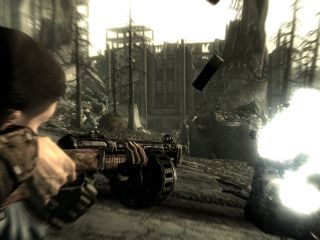 The Managing Director of Bethesda Europe has revealed in a recent interview that the company's follow up to the mighty Fallout 3 is set to be a 'genre-breaking' first person shooter, developed by UK studio Splash Damage.

What is more, the title that has been kept under wraps to date, is set to be officially launched at E3 early next month, Bethesda Europe MD and UK industry veteran Sean Brennan told gamesindustry.biz.

Fallout 3 has sold over 750,000 in the UK to date while, Brennan notes, "in Europe overall we're close to two million sell-through" while the glorious marriage of Splash Damage, previously known for its sterling work on Enemy Territory Quake Wars, with Bethesda is sure to throw up something genuinely game-changing.

Keep it fast and loose

So how can the company possibly hope to follow that massive success in 2009? Does Brennan want to recreate the glory days of Virgin Interactive in the early to mid 1990s?

Put simply: no. While Brennan obviously wants to grow Bethesda Europe he also wants to keep the company flexible, fast and loose.

Brennan wants to avoid the 'pick up mentality' and the huge overheads of staff costs across Europe where "what tends to happen is you have a product release schedule, but product tends to slip, and quite frankly, shit happens, so you have this huge overhead that you have to cover."

Brennan continues: "You go out and you try and sell distribution deals, and you try and pick up titles, and that pick-up mentality is a kind of anathema to a large degree. We don't want to replicate that model, we want to have a direct control over our marketing and PR in all the major territories in Europe."

"For us, the key thing going forward is product quality," he adds, gratifyingly, for the legions of gamers out there looking for the next big thing from Bethesda to follow on from Oblivion and Fallout 3. "We're still going to focus on what we're doing best, which is 360, PS3 and PC, triple-A products aimed at a more mature market place."

As for that Splash Damage deal, "its first title with us is going to be shown at E3," says Brennan, adding, "we're not announcing the name yet, but it's a first-person shooter... it is a genre-breaker... a real killer app."