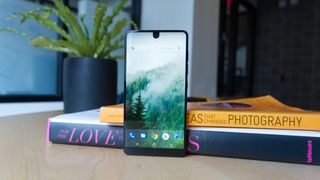 Despite offering a striking design and being one of the first phones to sport a notch (beating even the iPhone X), it’s fair to say that the Essential Phone wasn’t a total success, so news that the next phone from the company might be a very different beast isn’t overly surprising.

According to “people familiar with the plans”, speaking to Bloomberg, Essential’s next phone will use AI to respond to text messages and emails and book appointments completely on its own. It would do this while attempting to mimic the user, so responses feel believable.

As a result, it would apparently have a smaller screen than most smartphones, since you won’t need to directly interact with it as much, and many of the interactions that you do have would be voice-based.

Apparently due to this very different approach the phone would be marketed as a product designed to complement a user’s existing smartphone, or one aimed at people who want to spend less time staring at a phone screen.

One of the sources adds that Essential is aiming to have a prototype of the phone finished by the end of 2018 and may show it off to industry partners at CES 2019 in January. In which case, the phone might well go on sale in mid to late 2019.

It sounds like an ambitious plan and given the limitations of consumer AI so far we can’t help but be skeptical that Essential will pull it off, but if it does then this could be a phone that lives up to the company’s name.