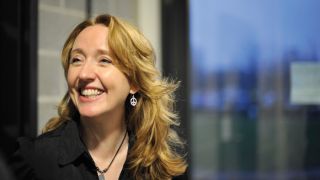 We love Linux. It's a great system that lets us tinker around to our heart's content, and it's free. Not just zero cost, but actually free from the constraints of commercial software.

If there is a downside to it, it's that it can be difficult to buy hardware set up ready to run. You can end up in a mire of checking spec-sheets against compatible drivers in various versions of the kernel, and that's without even considering the Microsoft tax.

However, it doesn't have to be like this. There are great companies making computers that just work with free software and come with Linux set up and ready to go. ZaReason is one such company, and Linux Format magazine caught up with its CEO Cathy Malmrose just after she gave a talk at FOSDEM on the dangers of UEFI.

LXF: When did you personally start to get interested in free software, and eventually the hardware that it runs on?

CM: I first got interested in free software in about 1998. We have two boys - one had red hair, the other blond - and they insisted on having nine desktops so that when they came home from school, their friends could play. So we had nine desktops and were so sick of blue screens every weekend. Nine desktops with a bunch of little kids playing on them - you're constantly doing tech support. We wanted something a bit more resilient.

LXF: Can you give us a little bit of a history about ZaReason? When did you start it? And what did you plan to achieve?

CM: Sure. We started in 2007 in Berkeley California. It started for two reasons: we couldn't find any computers running Linux out of the box, and we didn't want to mess with making sure we got the right components, so we decided to start a company where that's all we would do.

Also there was a computer recycling company nearby called ACCRC [Alameda County Computer Resource Center] that had put out over 16,000 Ubuntu desktops, and we were volunteering there helping them get their computers out to schools and other organisations that needed computers for free (16,000 Ubuntu desktops is a lot). And we found that Ubuntu could run on anything. It was just such a solid OS that we were impressed, and so we decided to start our own company in 2007.

LXF: What have the biggest obstacles been to selling Linux computers?

CM: The global expansion. But we're hardware geeks rather than business people. We're trying to hire a new CEO who can handle the global expansion, but it's really hard to find someone who can do that who can do what needs to be done and look at more than just cash. And who can make it sustainable.

LXF: We hear you're looking at moving to the UK at the moment.

LXF: What's the timescale for that?

CM: Right after the conference is over!

LXF: And you're starting in one location?

CM: Yes, just one little location. We'll partner with an existing computer shop. Someone who is already set up to distribute and already has fantastic tech support.

LXF: Beyond England, what's the next stop?

CM: Italy, France, Germany… any of the others. Let's see how it goes.

LXF: Do you find that the biggest challenge is getting the computers built, or getting people to buy them?

CM: The bigger challenge is the R&D. The one way to make my head spin is to say that all we're doing is pre-loading the software, because it's so much more than pre-loading software. There's so much R&D that goes into a system that will work in any environment, with any type of user, with all the components, with any type of thing that they want to load on it. A lot of our customers do a lot of heavy work.