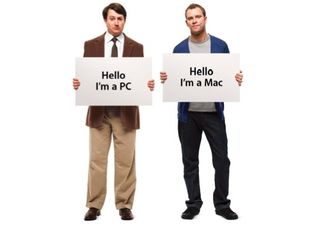 Design, reliability, security... we all know why Apple addicts love their Macs.

But despite fawning press coverage and the bad publicity surrounding Vista, Macs are still very much in the minority.

As it turns out, there are lots of perfectly good reasons for sticking with the PC.

Not everyone can afford a Mac
Before you post 200 reasons why Macs are better value than PCs, let us stop you. We're in the middle of a recession, people are broke and no amount of spec sheet comparison will magically put £1,000 in somebody's pocket. Mac Minis start at £390, MacBooks at £719 and iMacs at £782, so if you've only got £300 to spend then they're out of your reach. Conversely, we've seen monitor-free PCs for £181, and it's easy to find decent PC desktops and laptops for less than £500.

PCs are familiar
Andy from Glasgow likes Macs - "they're streets ahead in terms of audio and video," he says - but still uses what his employer provides. "I use a PC... I used Macs in a previous job, but these days it's a PC for work."

It's a habit that sticks, as Paul from Liverpool explains: "I started using computers properly when I was at Uni, where everything was PC [orientated]. Every office I've ever worked in has used PCs, so I guess it's just what I'm used to. I haven't even got round to installing Firefox at home, because I use Internet Explorer all the time at work. Never underestimate the power of inertia," he laughs.

Software matters
"Most of the music applications I use are PC-only, and if I changed to a Mac I'd have to learn to use different interfaces and pay a scary amount to buy equivalent Mac software," Paul says.

The same applies to games, creative software and so on: few, if any, software firms say: "Oh, you're switching? Here's the Mac version - for free!" Yes, you can run your old stuff via Boot Camp, but what's the point of changing to a new computer and buying another copy of Windows when you've already got a PC? Especially when...

Upgrading is cheap
PC running out of puff? You could buy an iMac, iWork and other Mac software, and it would all be lovely. Or you could stick a couple of RAM chips in your existing PC, upgrade the graphics card and hard disk, and keep using the software you've got. That would be lovely, too, and a hell of a lot cheaper.

Smugness isn't sexy
To some, Macs are like Porsches or BMW X5s: sure, the cars are engineering marvels, but have you seen the people who drive them? Sadly, a small but vocal minority of Mac fans have perpetuated this image online and even Apple has crossed the line: its UK Mac versus PC ads made Macs seem smug and superior in a market where everybody loves the underdog.

People want netbooks
People buy netbooks for all kinds of reasons: price (you can get a refurbished Acer netbook for £130 from EuroPC, while brand spanking new machines such as Samsung's NC-10 hover around the £300 mark), portability, convenience, and simplicity. They're one of the few bright spots in an otherwise depressing PC industry - but Apple doesn't make 'em, so people can't buy 'em.

Apple isn't the only alternative
You can leave Windows behind without embracing Apple or even changing your hardware, as David from Huddersfield explains. "Everybody I know who gives a crap about dumping Windows has moved to Linux," he says.