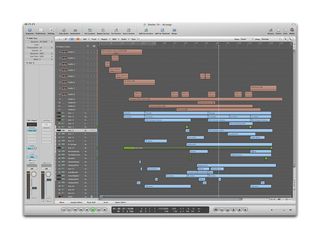 The Mac has played a major part in the development of music technology over the years. And now, musicians using the OS X platform have access to a variety of applications that would scarcely have been imaginable when the first software sequencers appeared back in the late 1980s.

Early versions of Logic and Cubase could only generate and process MIDI information – they had to be connected up to external synthesisers, samplers and drum machines in order to work. By the mid 1990s, sequencers added the ability to record and mix audio into their tracks and so 'virtual studios' were born.

As computers became faster and more powerful, music technology also evolved to include virtual instruments and effects. Now anyone can make professional sounding music with just a computer and no other instrument.

We have virtual synthesisers that sound as good as hardware instruments that cost thousands of pounds. We also have a full range of software samplers that can outperform their hardware equivalents.

Today, advanced sequencers such as Logic Pro, Cubase, Digital Performer and Pro Tools are giving professional composers control over their music, while GarageBand is providing access for beginners.

Innovations have always been happening in the music software world and many groundbreaking products have appeared over the past 15 years.

Back in 1994, a program called Koan broke new ground by being able to create music all by itself. Well almost – the user had to specify a handful of parameters before hitting the play button.

In 1997, U&I Software unveiled MetaSynth, an original sound-design environment that can create 'soundscapes' and other sound textures. It introduced a number of unique features including an Image Synth that can extract musical information out of pictures.

In 1999, Native Instruments introduced their modular synthesiser, Generator, to the Mac platform. Over the years it evolved and its name was changed to Reaktor. This software, for the first time, allowed large numbers of users to build their own instruments without having to program any code.

Now Reaktor is at Version 5 and there are more than 2,500 user creations online ranging from synthesisers, samplers, sequencers, drum machines and effects to a variety of strange soundmangling devices!

In 2001, Celemony launched Melodyne, a groundbreaking tool for correcting and modifying material. For the first time, musicians were able to open up audio files of monophonic solos or vocals and correct the intonation and timing of individual notes. Melodyne could also create harmonies and restructured melodies. Famous users included Peter Gabriel, Eminem, Massive Attack and Pete Townshend.

Also in 2001, Ableton unveiled Ableton Live, a loop-based music sequencer that allowed users to compose and arrange music on-the-fly during live performances. It was easy to use and was popular with performers and DJs.

Innovations also extend to the guitar world, with virtual software amps such as Guitar Rig and AmpliTube offering tones previously associated with expensive hardware amps. Guitarists can even plug straight into their computers.

While most music software is based upon the standard tunings used in our regular Western scale system, these apps allow us to create microtonal scales that sound out of this world. L'il Miss Scale Oven can even be used to retune Logic Pro… if you're that way inclined.

There are also programs that offer ways of removing hiss and crackles from vinyl and tape recordings. Bias' Soundsoap and iZotope's RX both do the job well.

So, as you can see, music software has already covered a lot of ground and provided solutions to a number of old audio problems. You could be forgiven for thinking that there isn't much else for music-app developers to do these days, but you'd be wrong – this is just the beginning...