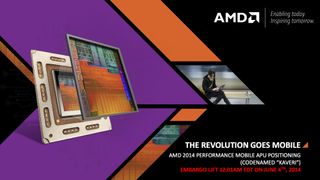 Kaveri is coming (to mobile devices)

You don't have to be a graduate from MIT to understand why the third generation of AMD's APUs (called Kaveri) are a good idea.

There's up to 12 (4 CPU + 8 GPU) of these guys on the top-tier chips and with the ability to change between GPU and CPU functionality on the fly, we could be looking to Kaveri to lead the charge for the next-generation of processing.

AMD has big plans for Kaveri in 2014, which it unveiled today, most of which include battling Intel for control of the mobile processing space. Yes, the same AMD-A Series processors you've seen in desktop builds are finally coming to high-performance laptops, and boy, do they look good.

Last month, TechRadar was invited to an announcement event to talk about the future of AMD. We saw two-dozen slides that had the same message: AMD's FX APU beats Intel Core i7. They had numbers and figures to back it up, too.

One slide showed the AMD FX-7500 was over 50% faster than the Intel i7-4500U in 3DMark 11 tests, while another touted 45% more system performance using BasemarkCL than the leading Core i7. The figures sounded staggering, but it wasn't the best AMD had in the bag for us.

The science of software

So how exactly did AMD pull these kinds of numbers from a hat? It starts with better system integration tools like AMD's Homogeneous System Architecture (HSA) and Graphics Core Next.

HSA, as best as it can be explained without talking about things like memory addresses, is a way for AMD processors to use parallel computations some of the time when working on graphics-oriented tasks, and serial processing for the more data-driven tasks. This effectively gives the CPU and GPU sides of the processor the same access to data, eliminating the need to go back and forth between the two.

GCN, on the other hand, allows GPUs to perform at higher speeds and even works to upscale 1080p outputs to a 4K resolution.

If this all sounds too tricky to wrap your head around, don't worry. It's all just the technical explanation behind why AMD's processors - at least in some scenarios - should run circles around Intel's Haswell chips.

The last announcement of the day was an interesting one: a "Pro" series of mobile processors that will accompany the consumer Kaveri products but with added stability for changing business environments.

Look at the specs. The AMD A10 PRO-7350B with Radeon R6 Graphics starts at 2.1GHz but can be overclocked to a solid 3.3GHz speed. Plus, it only draws a miniscule 19W, making it a shoo-in for battery life-dependent mobile systems.

Supposedly, these systems are going to receive priority updates with the focus on stability and longevity - which should be music to the IT professionals' ears. The first off the production line will be HP's EliteBook 725, 745 and 755 G2 notebook, the EliteOne All-in-One and the EliteDesk desktop PCs, coming later this year.

The numbers are in, and they look good. On paper, it looks like Kaveri will give Haswell a run for its money, and with its reduced power requirements you can plan on seeing a bunch more AMD-powered mobile devices in the near future.

Thankfully, a few manufacturers that have already been signed up for mobile Kaveri products like Acer, Asus, Dell, HP, Lenovo, Samsung and Toshiba just to name a few. More are to be announced at Computex Taipei.

What AMD still needs, however, are more application developers to adopt the HSA style of thinking - putting graphics and data processing on equal footing. Don't know if you should pick AMD over Intel? Check out our helpful guide!

Are you going to pick up a Kaveri-powered machine? Let us know in the comments!