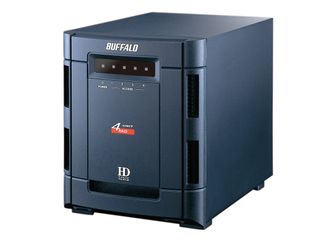 Buffalo has made two storage announcements at CeBIT, both about storage that's large in capacity and meant for the home. The TeraStation Live Multimedia Storage Server is a network storage device available in capacities of 1TB (HS-DH1.0TGL/R5) and the frankly cavernous 2TB (HS-DH2.0TGL/R5).

They'll be available for £382 and £638 respectively later on this month.

Among its more compelling functions is compatibility with iTunes Server. This means that PCs or Macs running iTunes 7 can access music saved on the TeraStation Live for playback. A direct copy function also enables files to be transferred directly onto the TeraStation from a digital camera or USB flash drive.

The device runs a Marvell Media Vault Processor and each has four SATA drives that can be assembled in the RAID formation of your choice - so you're always protected in the event of drive failure. The TeraStation Live includes Print Server functionality and an FTP server, allowing users to access and transfer data from any machine with internet connectivity.

Buffalo has also announced the DriveStation Quattro at CeBIT. Again, it's available in capacities of 1TB (HD-Q1.0TSU2/R5) and 2TB (HD-Q2.0TSU2/R5). This is a more standard USB solution for direct connection to a PC and Mac.

The four-drive arrangement offers protection for your data, while transfer speeds are up to 100MB per second. The drive can be used to auto-backup your system.

Both the TeraStation and DriveStation Quattro conform to DLNA (Digital Living Network Alliance) specifications. DLNA is an organisation working to ensure that various digital home devices work together, and is backed by companies including Microsoft and Nokia.