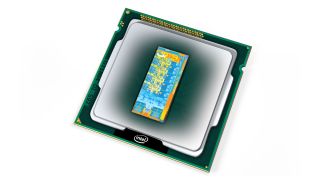 Intel doesn't make desktop processors and hasn't done for years. It makes mobile CPUs. And it makes server chips. But that's it.

This, people of TechRadar, is the gospel truth.

Of course, Intel certainly markets a full range of processors for desktop PCs, but every last one of them started out as something else.

Mainstream favourites like the Core i5 2500K are high end laptop chips tweaked for the desktop. High end beasts, including the new Core i7 3960X, are thinly disguised server CPUs.

That's important because it makes Intel's latest family of CPUs, like the Intel Core i7 3770K and Core i5 3570K, much easier to understand.

It explains why the new Ivy Bridge generation in desktop trim is getting little to nothing by way of added cores or clocks. It even just about justifies Intel's claim that Ivy Bridge constitutes the third generation of its Core processor line, despite the fact that it's a die shrink and not an all new architecture.

But let's not get ahead of ourselves.

First, let's tour the highlights of Intel's latest CPU family. In Intel's Tick-Tock parlance, Ivy Bridge is a Tick and that means a new process. In simple terms, it's the 22nm follow up to Intel's searingly successful 32nm Sandy Bridge processors, which launched a little over a year ago.

According to Intel, it's a little more complicated than that.

For starters, Intel reckons the shift from 32nm to 22nm is something a bit special. Typical die shrinks involve making things smaller. When that happens, you usually get processors with more transistors, better power efficiency and higher clocks, but the most of the basic principles remain largely the same.

Not so for the new 22nm process, says Intel.

The big change is the introduction of what it calls 3D Tri-gate transistors. The details are mind bogglingly complex, but the simple version goes something like this: in conventional transistors, the gate oxide and inversion layers which essentially channel and control electrical current are flat and planar with relatively low surface area.

In 3D Tri-gate transistors, it's as if the gate oxide and inversion layer has been flipped up on its side and joined by two chums.

That means much great surface area and in turn brings a load of benefits. Firstly, you get more control over current and thus much lower leakage. Less leakage means less power consumption and less heat which is just bonza for laptop CPUs.

In short, 3D Trigate-gate transistors are better at everything that matters.

In the desktop context, what we've got is a new process that ought to allow for more features, be they cores or something else, and higher clocks.

The other half of the equation is the architecture.

As above, Ivy Bridge is not all new. On the CPU side, not a lot has changed. The execution engines are carried over with only very small tweaks to the FP/integer divider, which has twice the throughput compared with Sandy Bridge, and a couple of other upgrades that involve data structure sharing and better handling of MOV operations.

If that doesn't mean much to you, don't worry, the proof is in the performance, the details are relatively academic.

Elsewhere on the CPU side, Intel has upped Ivy Bridge's security ante with a hardware random number generator, which is handy for encryption, and a hardware-enabled supervisory mode that helps prevent malicious code from being executed.

But this is the kind of stuff businesses will hook into rather than anything home users will automatically benefit from.

The basics are the same, so overclocking is effectively something that can only be done via the multiplier and that means only fully unlock K series models are pukka overclocking candidates. But the absolute multiplier limit for K series chips has been increased from 57 to 63, something that's really only of interest to extreme enthusiasts.

More relevant is the addition of real-time multiplier tweaking from inside Windows. If nothing else, it will help cut out all that tedious rebooting.

What Intel hasn't done, however, is add any more cores.

We'll come to the detail momentarily, but the top Ivy Bridge model, like the Intel Core i7 3770K, sticks with four cores, just like existing 2nd Gen mainstream Core i7 chips for the LGA1155 socket.

Still, at least the good news is that we're still talking about LGA1155 chips. BIOS updates permitting, they theoretically drop into any 6 Series motherboard, including those based on the H67, P67 and Z68 chipsets. It works the other way, too.

If that's the traditional CPU side covered, it's the graphics part of the equation where things get really interesting.

As before, a full function graphics core is integrated on-die. As before, it comes in two version. And again as before, the entry-level model, now known as HD graphics 2500, has six execution. But the top HD 4000 model now has 16 instead of 12.

That's not all. Intel says each of those units are more powerful than before and now supports DirectX 11, including tessellation. That's enough, Intel says, to see the six-unit HD 2500 out perform the old six-unit HD 2000 by 10 to 20 per cent.

Along with quicker 3D rendering, Intel has given the broader graphics package a polish. The QuickSync video transcode gets a once over for better performance, for instance. Native support for up to three displays is another first.

That, pretty much, is your lot.

Which begs the question of whether Ivy Bridge deserves its status as the "3rd Generation" of Intel's Core processors. Intel says it's justified by the major graphics overhaul, but we think it's a pretty odd thing to claim.

It certainly adds to expectations. As you'll see when you peruse the benchmarks, that may not have been wise.

If that's the broader architectural low down, what about the processor models themselves?

At launch, there are nine new models to choose from. Putting the specialist low-power chips to one side, there are five you need to know about.

That's a big disappointment given the hype surrounding Intel's 22nm process and the fact that once again we're not getting extra cores.

Any increase in performance will need to be architectural. And that's a big ask for what is, on the CPU side at least, largely a die shrink.

And what about AMD?

Ivy Bridge may be a bit late (it was due out at the beginning of the year), but it's still miles better than anything AMD can currently offer.

Is there hope for tougher competition from AMD any time soon?

For starters, AMD recently said it no longer sees the fight with Intel for PC dominance as relevant. Instead, it sees mobile computing as the future. That, frankly, is a little disingenuous.

Sure, mobile is where the growth is for the computing industry at large, but AMD would dearly love for its Bulldozer FX processors to be taking the fight to Intel.

As it is, Bulldozer turned out to be another dud. AMD needs something dramatically different. And it's not coming any time soon.

Next up is Piledriver, due later this year if AMD hits its targets, which it usually doesn't.

Architecturally, Piledriver is no big shakes. But there is one feature that might just make things interesting.

Known as resonant clock mesh, the idea is to use capacitance to capture clock power and recycle it, reducing power consumption by as much as 10 per cent.

According to Cyclos Semiconductor, the oufit responsible for the new tech, it can also be used to push clockspeeds beyond 4GHz.

Of course, the top Bulldozer chip already exceeds 4GHz in Turbo mode. So it'll have to be well, well in excess of 4GHz. In truth, Piledriver needs to hit 5GHz to really put a bat up Intel's nighty.

Can you see that happening? We can't.