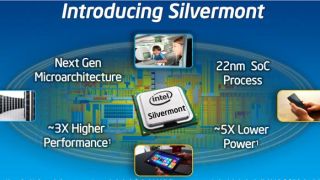 Intel is still offering Celeron and Pentium processors, but now it's switching these low-budget chips to tablet-focused Atom architecture.

Specifically, Intel plans to fill entry-level laptops and desktops with variants of Bay Trail, its Atom-based System on a Chip.

Bay Trail, which is scheduled to appear in tablets this holiday season, fulfills Intel's previous claim that the Silvermont technology behind the chip "has a ton of flexibility."

"Because of the advancements and flexibility of the ... Silvermont microarchitecture, we can customize the Bay Trail feature sets and develop variants of Bay Trail," said Intel spokeswoman Kathy Gill, according to PC World.

SoC with a low price point

"Bay Trail [will] power a new crop of computing products at a variety of price points," said Gill.

"The goal is to offer our customers the broadest selection of form factors, features and experiences at a range of price points."

Pentium and Celeron, available since 1993 and 1998 respectively, have previously used vanilla versions of Intel's Core line of processors.

The redesigned Atom-based chips, Bay Trail-M for mobile devices and Bay Trail-D for desktops, should appear under the Celeron and Pentium brands when Intel makes the switch.