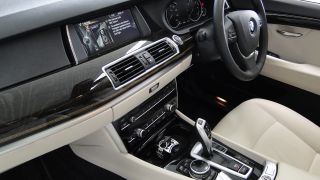 BMW's latest techtastic build of iDrive with ConnectedDrive and new touch capability is out and we've been fingers-on with the feature-packed new system.

Highlights include a new touch-pad input option, uber high-res graphics and new internet-connected features. A whole swathe of functionality, including remote services, app support and more, has also been revised.

Overall, iDrive has grown into a real beast of a system and one that most other manufacturers struggle to match. Only Audi MMI and Mercedes COMAND are really in the mix. Yup, it's those pesky Germans dominating all things automotive, as ever.

It's not all about iOS

As it happens, in-car multimedia is a hot topic right now what with Apple planning to assimilate automobiles into iOS. BMW has been luke warm about the idea of handing over in-car functionality to Apple. And the launch of the new version of iDrive and ConnectedDrive is the perfect demonstration of the alternative vision to Apple iOS in-car.

That vision involves and advanced and fully-integrated factory-fitted system that syncs seamlessly with smartphones and particularly with iOS handsets but doesn't throw in the towel and allow a mobile device to do the heavy lifting.

So what are the key upgrades that come with ConnectedDrive 2013? First up is 3G connectivity integrated into the system. Previous builds of iDrive made do with an Edge connection and that made all the internet-connected features run dog slow.

What does that enable? Well, stuff like high definition real-time traffic data for the navigation. And about time, too. Most factory-fitted navigation systems rely on boring old RDS-TMC traffic data and it's just not good enough.

Especially not when the likes of TomTom and Google Maps on a smartphone are offering HD traffic.

Anyway, the point is that BMWs have a SIM card and cellular adapter integrated into the car. You don't need to hook up a smartphone to have internet access, in other words. BMW says its plan is to have at least five million BMWs on the road and thus equipped by 2017. Yikes.

Then there's the new touch input pad. It sits atop a new, larger iDrive wheel and allows you to swipe in characters with a finger. You can also use it just like a laptop touchpad to guide a pointer. That's handy if you're using the web browser.

With touch added to the mix, you now have three ways of inputting data. Touch, the wheel and voice command. The latter comes in two forms. The built-in voice command is supplied by Dragon NaturallySpeaking and works about as well as we've ever seen in a car-based voice recongition system. We're not sure we'd actually use it, but it's pretty good.

You can also hook a smartphone up to the system and access its voice control. Currently Apple's Siri and Samsung's SVoice are supported.

Next up is graphics. As in gorgeous. iDrive has the best graphics of any current in-car multimedia system in the UK. And they just got better.

They're the best because they combine slickness with clarity and logic. The revised system now offers snazzier transistions including 3D and transparencies and – critically – better frame rates.

The latter makes a big difference, again, in the navigation system. Zooming in and out of maps is now buttery smooth. The same goes for map scrolling as you cruise along. The maps have some pretty nifty 3D models for major town and city centres and land marks, if you care about that kind of thing.

Then there's the new ConnectedDrive Store. The idea here is to enable you to buy apps and services for your BMW. Part of this new service is the general philosophy of greater configurability. You can now pick and choose your BMW's infotainment functionality as well as upgrade it after purchase.