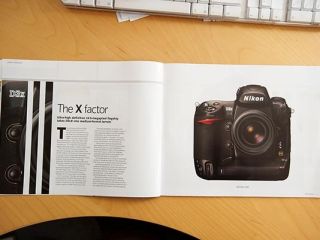 There's nothing like a bit of pre-Christmas rumour mongering to get camera aficionados hot under the collar.

And that's exactly what Nikon has created with its until-now secretive D3x.

While there's been much rumour and speculation that the camera will hit shelves before the year is out, Nikon hasn't quite gone as far as giving release dates, but the company has finally confirmed that the camera is indeed real.

To prove it, Nikon has printed details about it in its own magazine, Nikon Pro.

News that the magazine had run a feature about the new camera leaked on to DP Review's forums, where one reader kindly posted picture proof of the article.

The specs released may not be quite as spectacular as some would have hoped – the camera bears the same body, AF, metering and main functions as the D3 – but a 24.5MP, FX-format camera that is capable of shooting 5fps at full resolution or 10MP shots at up to 7fps sounds pretty good to us.

Couple this with an ISO range of 100-1600, a 51-point autofocus system and the ability to geotag shot wirelessly and Nikon could well be on to a winner.

What the article in the magazine failed to mention was price and date of arrival. Fingers crossed that the company decides to launch it just in time for the camera to feature on our Christmas lists.