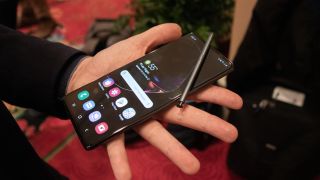 The Samsung Galaxy Note 10 Lite is expected to be announced in India on January 23, however, a recent report revealed that interested buyers will be able to pre-book the phone starting January 21.

According to 91Mobiles which cites "industry sources", the Galaxy Note 10 Lite will be up for pre-bookings starting January 21 across offline and online stores in India. The phone will go on sale in India from mid-February, possibly after the global unveiling of Samsung Galaxy S20 series which is slated for February 11.

Let's take a brief look at the specifications of the Galaxy Note 10 Lite.

Being a phone in the Note series, the phone supports SPen stylus which has built-in Bluetooth, accelerometer and gyroscope sensors.

The Note 10 Lite is powered by Exynos 9810 chip with an octa-core CPU and Mali-G72 MP18 GPU. This is paired with upto 8GB RAM and 128GB internal storage with an option to expand it upto 1TB via microSD card.

The phone has a triple-camera setup which consists of three 12MP sensors-- the primary lens has an f/1.7 aperture and Optical Image Stabalization, the second one is a telephoto lens with 2x optical zoom, f/2.4 aperture and OIS support and the third is an ultrawide lens.

On the front, housed within the punch-hole cutout is a 32MP, f/2.2 aperture selfie camera.

The Galaxy Note 10 Lite has an in-display fingerprint sensor and the battery is rated at 4,500mAh with support for fast charging via USB Type-C.