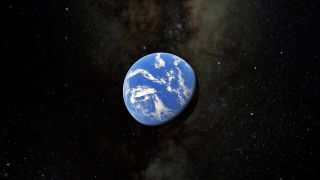 If you've never used Google Earth on your mobile - or you tried it long ago, and your phone wasn't powerful enough - a new update might well bring you back into the fold.

An update to the Google Earth app now allows you to zoom 30,000 miles above the Earth - and see the stars in the background as captured by the European Southern Observatory.

This means you can spin the globe around and see the Milky Way in the background, and wonder at the beauty of the cosmos.

This feature has been available on Google Earth desktop and in the pro version previously, but as smartphones have become so much more powerful in recent years, the stars can now be found in the palm of your hand.

The news was announced by Google on its blog, but that page is now - confusingly - directing to a 'error, page not found' placeholder, despite the content being available to see in snippet form when search on Google itself.

Whether that means it's been announced early, or Google is just having a page glitch, us unclear - but we were able to download and use the new functionality in the Google Earth app on an iPhone 11 Pro Max with no fuss.

If you've not played with Google Earth of late, please don't do so at work - you'll lose hours when trying to research a news story and your editor will be mad when they find out.

However, our sister site Live Science has picked up 25 things to find on Google Earth (check out the weird wheels) so you can explore to your heart's content on mobile or desktop - whichever takes your fancy.