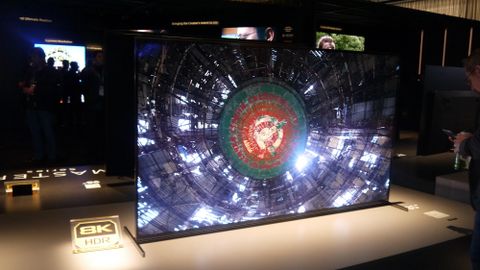 The Sony Z8H (ZH8) ditches some key technology from last year's Z9G in hopes of creating an 8K TV that's more affordable for everyone. They do still hold on to many other key Sony picture technologies, though - as well as introducing some new innovation of their own.

These new 8K sets ditch the Master Drive panel technology of the Z9G in favor of a more regular direct LED with local dimming light engine, and don’t target the same extraordinary 4,000 nit brightness levels of the flagship models.

They do still hold on to many other key Sony picture technologies, though - as well as introducing some new innovation of their own.

The Z8H 8K TVs feature a fairly eye-catching design: a slim black frame around the screen is offset by a gleaming metallic trim that continues, cutely, into a pair of low-profile silver feet that sit right under the screen’s bottom left and right corners (though they can also be positioned closer together if you don’t have a piece of furniture wide enough to support the full width spacing).

These feet are only a centimetre or two wide at when viewed head on, meaning they’re about as discreet as it’s possible to be.

Sony was brave enough to demonstrate the Z8H’s unique audio setup at the CES with the first Jenny Lind performance from The Greatest Showman. And the results were outstanding.

The forward-facing speakers made sure the sound had real impact, pushing forward into the room with bags of distortion-free volume and exceptional dynamic range.

The Frame Tweeters, meanwhile, helped to create a striking sense of verticality, generating a wall of sound onto which the Z8H painted sound effects that tracked with uncanny accuracy the position of corresponding objects in the picture. So, for instance, if someone is shown talking in the top left of the picture, that’s where the voice physically appears to be coming from on the screen.

Since the Z8H doesn’t get one of Sony’s Master Drive panel designs, it will cost significantly less than the Z9G.... or at least, that's what we hope. The downside is that it also won’t have as many dimming zones (though Sony never shares specific numbers on this); and, as demonstrations prove, it isn’t as bright.

Demonstrations also prove, though, that the Z8H's picture quality is still shaping up very nicely indeed.

Particularly impressive was the phenomenal punch the Sony set manages to achieve with bright HDR content such as the neon lights of Times Square in Chapter 5 of Sully. These really stand out, creating the most aggressive HDR impact I’ve seen on any TV bar Sony’s own Z9G.

These intensely bright highlights are the result, most likely, of the combination of Sony’s X-Tended Dynamic Range feature (which takes energy from dark picture areas where it’s not needed and feeds it to bright areas instead), and the intelligent backlight controls provided by its X1 Ultimate processor.

Also standing out during the Sully sequence Sony used in its Z8H demonstrations was the set’s color performance. The colors of the bright Times Square elements look phenomenally rich but natural - yet darker hues, such as the grey skies behind a frigate on the Hudson, also look much more natural and evenly toned than they did on a key rival 8K set Sony was running alongside a Z8H.

Switching to the shot in Gravity where Sandra Bullock spins helplessly off into space, meanwhile, the TV did a stellar job of delivering both the blackness of space and a vast number of stars. There was no sign of the black crushing or ‘pulsing’ backlight witnessed on the rival high-end 8K TV Sony was pitting its new model against.

Further underlining the apparent backlight superiority was a scene from Chicken Little (!). This features a bluish evening sky punctuated by a few stars and a glowing green light that circles round and round until it creates a glowing ‘halo’ in the sky. And while the Sony’s blue sky looked uniform and natural, the rival 8K TV exhibited clear signs of blooming and backlight manipulation around the brightest parts of the picture.

The Z8H’s stars and green halo didn’t look as bright as they do on the rival set. But overall the Sony set’s approach looked more immersive and natural, as it didn’t distractingly expose the workings of the backlight system.

The early shot in The Revenant, meanwhile, where Leonardo Di Caprio’s face appears in the foreground against a white sky, exhibited practically no colour banding issues as the image fades to black. Unlike pretty much every other TV I’ve watched this shot on. A result of the X1 Ultimate processor’s Super Bitmapping technology.

There was also noticeable black crushing on the shadowy side of Di Caprio’s face on the rival 8K TV that was completely resolved on the Z8H.

Sony wasn’t just running its Z8H against a key rival 8K screen during its CES demonstrations - it also had a Sony BVM-X300 professional OLED mastering monitor sat alongside it. And comparisons between the ZH8 and the mastering monitor frequently found the Z8H getting startlingly close to the images of the pro-grade display.

One last picture point to cover is that the ZH8 produced impressively deep but also natural black levels throughout the time I spent with it - despite also benefiting from the Sony X-Wide Angle technology that’s caused a few black level and backlight problems on previous Sony models.

Sony also demoed the sequence in It where Pennywise terrorizes the children by escaping from a projected photograph. This section of the film features a hugely detailed and escalating Dolby Atmos sound mix, yet the Z8H handled it superbly, constantly growing in stature without starting to distort or thin out. Even better, the frame tweeters helped the set clearly reproduce the vocals of the terrified children, even as the score reached its peak intensity.

To try and ensure everyone who buys one gets the best from its powerful new speaker system,  Sony has equipped its new sets with an auto-calibration feature. This outputs a test tone to measure the reflective qualities of your room, using the TV’s built-in mic, and tweaks the TV’s audio settings accordingly.

Much as we loved Sony’s Z9G 8K debutantes in 2019, they were clearly beyond the budget of most mere mortals. So it’s great to see the Z8H shaping up to be excellent cheaper alternatives. Look out for a full review in the next few months.