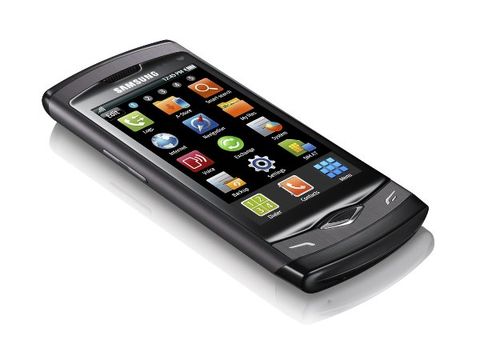 A phone that's full of style but backed up with a large amount of substance, this could be a real winner for those looking to take their first steps into the smartphone world.

We've finally managed to get our hands on a final release unit of the Samsung Wave - and the good news is it's a darn sight better than the pre-production version we tested a few weeks ago, so read on to see the updated and final Samsung Wave review.

The Korean firm has made the somewhat leftfield decision to launch its own OS and with the new Samsung Wave it gets a phone with top-notch hardware to debut it on.

This isn't just another 'and me' Samsung phone – it's crammed to the hilt with high end features, such as HD video recording, a 1GHz Samsung-own Hummingbird processor, a super-slim chassis, the latest Super AMOLED screen and multi-touch support right out of the box.

However, it's still rocking Samsung's TouchWiz overlay, which is great if you like Samsung phones, but a very different experience for those joining the Korean giant for the first time.

So is this another middling handset from the firm that brought us more phones than we could shake a stick at last year, or is the Samsung Wave the first phone of a radical new dynasty?

The first two things to note about the Samsung Wave are obvious: the build quality and the screen just cram style into your eyeballs.

The phone is very slim at less than 11mm thick and the metallic build quality is apparent the second you hold it in your hand. Given a startling number of purchases are made in store based on how a phone feels this will be head and shoulders above the rest to that demographic.

The front is sparse in terms of buttons, with call, terminate and menu keys the only things apparent other than the 3.3-inch capacitive screen. The menu key is sculpted and nicely tactile, although perhaps a little large.

The rest of the phone is pretty simple: volume up/down keys on the left-hand side, lock and camera shutter keys on the right-hand side and the top sees a 3.5mm headphone jack and a microUSB connector with sliding cover.

Other than that, there's only the diamond-shaped 5MP camera on the back with accompanying LED flash, which all together gives the Wave a very refined look indeed.

And if you're impressed by the chassis, then you'll be amazed by the SuperAMOLED screen, with its high-res 480x800 WVGA screen with great viewing angles and jaw dropping contrast.

It zips along under the finger too, and allows you to see a huge amount of information, be it widgets on your home screen or a full internet page.

In short, the Samsung Wave looks the business, but while it's nice to get a phone out in the pub to impress your mates once in a while, you've still got to live with it day to day, so let's dive under the hood to see how it works.