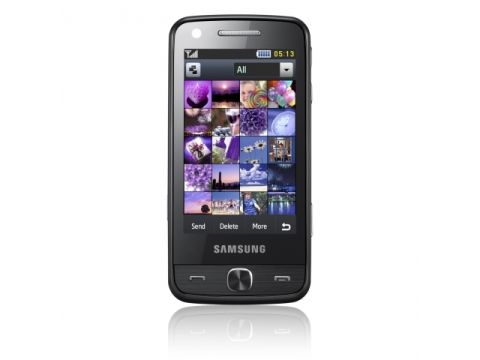 A decent first 12MP phone on the market, but a benchmark the rivals are likely to beat

But does it actually help bring the humble cameraphone a step closer to felling the might of the point-and-shoot compact, or is it just a fancy marketing ploy that adds a hefty chunk to the price for not a lot of extra functionality?

It's important to remember than the Samsung Pixon 12 M8910 isn't a new phone, more the Korean company picking up the original Pixon M8800 and saying: "we can rebuild this".

So the chassis is primarily the same, with a 12MP snapper bolted on the back, the screen slightly shrunk and a weird faux-leather lip added to the bottom.

Not only that, but it's an expensive unit as well - we're talking around £35-£40 on contract for a 24-month term (that's if you want the phone for free) and around £520 if you're after the handset only. That's a lot of wonga for a phone that is lacking one or two key pieces, but we'll get to that a little later.

The overall feel of the Pixon 12 M8910 is odd. On the one hand, it feels a little chunky and unwieldy, but for the male palm in particular it's actually nicely comfortable to hold, and the weight is more satisfying than it is annoying.

The black chassis is encased in a chrome band, housing all the buttons yet keeping most fingerprints away from the phone. The right-hand side of the phone holds the camera buttons, with the shutter key and dedicated camera activation button next to each other, and the volume key morphed into a zoom control.

We're not convinced simply sticking 'W' for wide angle and 'T' for tele-photo (or zoom out and zoom in for normal folk) helps much, but it certainly makes things a bit more camera-like, and it's raised too for added convenience.

The dedicated camera button replaces the media key from the Pixon M8800, and allows instant access to the camera (or turns it off after you're done). We're not sure why this has been added, as surely pressing the shutter button is a good enough option to let you start the camera.

And now you can't reassign the key as you could on the old Pixon M8800, when you could allow it to open up shortcuts to often-used applications.

The shutter switch for operating the camera is good quality though, allowing you to half press to auto-focus and there is an obvious difference between the two levels of pressure for picture taking.

On the left-hand side of the phone is the lock key, and this operates in a similar way to that on other Samsung TouchWiz interface phones (such as the Tocco Ultra Edition and the Samsung Jet) whereby you have to press a button to open the lock screen, then press and hold the lock button to unlock the phone. It's an annoying system, and one we're surprised Samsung hasn't sorted.

The microSD slot is also here on the right side of the phone, and has a nice hinge to allow you to open it up and expand the memory. It has a similar action to the hinged cover for the microUSB port at the top, and adds a touch of class to the design.

We're once again treated to a front facing camera for video calling and self portraits - the proximity sensor next to it (used for telling the phone when a face is pressed against it) is a little more subtle than that on the previous model.

The front keys feature a slightly re-designed set of buttons, with the tactile call/terminate keys feeling nice to press, and the square-ish button returning you to the menu screen and displaying the 3D interface to let you know which applications are currently running.

One of the most obvious things on the Pixon 12 M8910 is the rear, with not only a lovely lurid label telling us all what's going on under the hood (think Sony Bravia TV packaging here) but a huge lip with a faux leather covering.

We're a little unsure why the bottom of the phone has this, as it's not housing any camera innards. We can only assume that's where Samsung has been forced to put a bulk of the technology in order to keep the middle slim, and has covered it in the way it has simply to ignite memories of 'proper' cameras from long ago.

Given there's sadly - very sadly - no 3.5mm headphone jack on offer here, the box obviously contains the necessary hands free kit/adaptor for your personal headphones. Samsung offers its own buds in the box as well; while they're actually decent quality in-ear efforts, the fact they're not specially designed for microUSB tells you all you need to know about them.

There's a 2GB microSD card (with adaptor for big SD in there as well) so your media is well catered for (and is expandable up to 16GB), no thanks to a paltry amount under the hood from the box (150MB) which will barely help in a marathon 12MP snapping session.

Other than that, it's pretty much as you'd expect - CD with Samsung Studio on board, a user manual that is a little patronising and doesn't always explain things (and of course, real tech-lovers NEVER need manuals) and a microUSB connection lead and charger as well.

There's also a bizarre carry case with a hole cut out for the lens - seeing as you can't see the screen and can barely hit the camera key, we're pretty sure this is just for show.