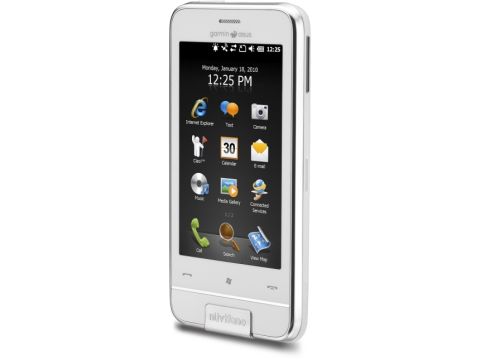 A decent sat nav that doesn't offer much as a phone - Windows Mobile 6.5 just isn't good enough to make this a worthy all round package

While previous attempts to fuse mobile phones and sat-nav devices haven't set the world alight, Garmin-Asus is hoping that its latest Windows Mobile-powered attempt will change all that.

Garmin has had a bite at the smartphone/sat nav market before, integrating the technology with the Palm OS and Windows Mobile in its iQue range way back when those two operating systems were fighting it out for the smartphone top spot.

Those were the days when GPS antennae had to be flipped out through a separate section on the back of the handset. Yep, we are talking waaaay back. About 2004, 2005, 2006. Times when Google Mail was an underground notion.

Garmin left that market only to bounce back with a partnership with Asus for the Nüvifone range. Asus provides the hardware, Garmin sticks to the sat nav side of things.

There are two handsets in the new Nüvifone range. The M10, which is the first to hit the streets, runs Windows Mobile 6.5.3. Coming later, the A10 is set to appear, running Android.

Yes, we know, Windows Mobile 6.5.3. It isn't exactly the ideal operating system for a smartphone these days, not least because the much-improved Windows Phone 7 is about to make its first appearance soon.

But Garmin appears to be working on the basis that the business community will remain committed to this version of Windows Mobile for a while, and the upcoming Android based Garmin Asus Nüvifone A10 will have more mass appeal, so here we are with the Garmin Asus Nüvifone M10.

With HDSPA, Bluetooth, Wi-Fi, GPS and a 5MP camera the smartphone basics are covered. The presence of a 600MHz processor sounds fair, though not great, on paper.

You've got 512MB of ROM plus 4GB of flash storage and room for a microSD card too. That 4GB of flash is partly used to store mapping data for the navigation aspect of the Garmin Asus Nüvifone M10. You get maps for much of Europe, and there was 1192MB free on our review sample.

The microSD card is in a fiddly location under the battery – there'll be no hot-swapping here.

Design-wise the Garmin Asus Nüvifone M10 is a tidy little device. We weighed it at it 150g and while it's a little on the thick side at 14.3mm it shouldn't trouble most pockets measuring 116mm tall and 58mm wide.

The black and silver chassis design isn't much of a surprise. Nicely curved edges with silver trim are a doff of the cap to the iPhone, the matte black backplate makes for comfy handling while the more reflective front screen surround, and the screen itself, are the usual fingerprint magnets.

Beneath the screen there are three touch buttons – Call, End and the Windows Mobile Start menu key, and beneath these something which looks like it ought to be a navigation button but is, in fact, just a big chunk of branding: a silver rectangle with 'Nüvifone' emblazoned on it. Really, Garmin, this seems a little OTT to us.

There's something on every edge of this handset. On the bottom is just the microphone, while the top houses the main power key and the on/off switch.

On the left edge is the micro-USB connector for mains power and PC connection and the power connector for the in-car navigation cradle, on the right is a volume rocker and a small indent for helping to attach the Garmin Asus Nüvifone M10 to its cradle.

The box contains a lot of bits and pieces. You get the usual things you'd associate with a smartphone, such as headphones, mains power adaptor, PC cable, quickstart manual and a getting started CD.

There are also the bits you'll need for the sat nav side of things which include the cradle gubbins and a car power adaptor.

The cradle is remarkably small, and fits together really easily. The Garmin Asus Nüvifone M10 sits in a ball and socket joint so you can easily swivel it around to whatever viewing angle suits you best, and the fit is tight. A little too tight if we're being picky.

The Garmin Asus Nüvifone M10 slots in and out of its cradle very easily indeed. We've seen some ropey build quality on car cradles in our time, but we've no complaints here.