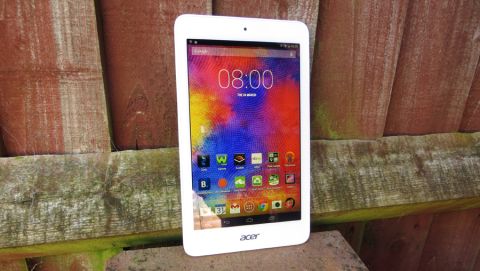 The Iconia One 7 offers strong processing for a great price. But with a terrible camera, an excess of bloatwear and terrible build quality, there are plenty of better choices out there.

Acer isn't a newbie to the low end of the Android tablet market, having slowly carved itselves a niche as one of the better-known brands among a host of budget competitors. While early attempts at tablets bearing the Iconia label were relatively uninteresting, the latest addition to the range – the Acer Iconia One 7 – looks (at least on the surface) like it might be a little more appealing.

Running Android 4.4.4 KitKat straight out of the box, and powered by an Intel Atom processor, first impressions of this 7-inch tablet are pretty good for the low price of only £99 (US$146, $192 AUD). Easy comparisons can be made to the Google Nexus 7, though the One 7 has slightly smaller dimensions and a lower resolution 16:9 screen.

Other than the price, the main headline for Acer's new budget tablet is that it packs an Intel quad-core processor – an interesting alternative to the ARM processors that you'll find in any other cheap Android tablet. This is coupled with 1GB of RAM and 16GB of storage, with room for additional expansion via microSD.

The Acer Iconia One 7 is relatively slender, with a 8.6mm chassis. However, it's not the lightest 7-inch tablet around, weighing in at 320g – a full 51g heavier than the lean Asus MeMoPad 7 ME572C. It's certainly not fat, and feels light enough to slip into a bags without adding too much heft.

The design is relatively understated, but the dimpled rear and 7mm bezel set the One 7 apart from other budget tablets.OK , so the design isn't in the same league as the metallic Apple iPad Mini, or quite as attractive as the aluminum rear on the 3G-connected Acer Tab 7, but there are certainly worse looking budget slabs around.

Build quality is most definitely a mixed bag. The smooth glass of the front looks and feels great, but give the tablet a subtle twist and you reveal where the majority of the corners have been cut. I do this with every smartphone or tablet I review, and the Iconia One 7 dished out some of the most disappointing creaks and groans I've heard in long while.

In fact, it goes one step further than this. I was actually able to remove the entire rear panel of the One 7, by hand, with almost zero fuss. The plastic panel isn't supposed to be user-removable, but there's nothing more than a few plastic clips holding it in place.

With them out the way, all the tablet's delicate internals are laid bare. This would be acceptable if it was intended to be serviced by the user, but while it makes the tablet more repairable, it exposes circuit boards and a 3420mAh battery which you wouldn't want your child getting their hands on – not good, Acer.

Moving on from this unnerving revelation, you'll find the power button towards the top of the right-hand edge, with a single volume bar residing just below. There aren't any other physical buttons on the Iconia One 7, but near the top of the opposite edge is a handy microSD port that'll take cards up to 32GB.

Both the 3.5mm headphone and micro USB sockets are found alongside each other on the top edge of the tablet, with a microphone slightly further along.

Apart from the 0.3MP front-facing camera, the front of the One 7 is devoid of any notable features as it uses on-screen buttons rather than capacitive alternatives. Flip the tablet over and you'll find a 5MP snapper on the top left corner, and a wide speaker grill at the bottom, which conceals two speakers.