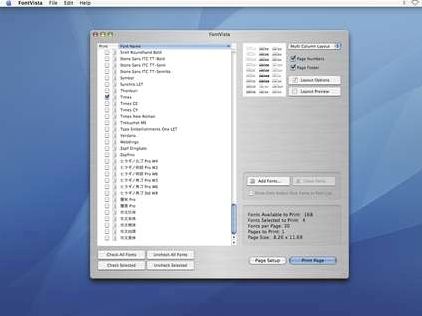 Morrison SoftDesign also claims that the interface controls have been simplified

Bit better than FontDoctor, but some minor coding could improve the speed of use

FontVista 3.5 is a font manager that serves as an interface for any fonts on your Mac. It displays them in a single panel, with the fonts listed in a menu on the left, and inspects them for corrupt files. Think of its rival app, FontDoctor, and you get the idea.

With version 3.5, FontVista now supports TrueType (Mac and Windows versions), PostScript Type 1, Multiple Master fonts, OpenType and Apple DataFork fonts. Morrison SoftDesign also claims that the interface controls have been simplified, the fonts load and preview faster than ever before, and the layout options have improved, along with the usual bug fixes.

The changes in this upgrade are of the touchy-feely variety; rather than being massive feature improvements, they boost the overall feel of the app. For example, you can now drop a folder of fonts directly into the Font menu, and have a one-click preview page before printing.

In our opinion, there are still some key omissions. We'd like to have the ability to preview smaller lists of checked fonts, rather than the whole library. It would also be good to be able to double-click a single font open. This would speed things up, especially for designers with a thousand or more fonts.

FontVista prints out fonts well enough, but with a few minor hiccups here and there, such as when you're faced with a missing font which prints as a black cube in preview sheets. Font searching and loading are both reasonably speedy, which is important.

Adding fonts was glitch-free during out test; we had no hangs, which means that background improvements have taken place. Some Mac users also believe that the app does a better job of weeding out corrupt fonts than FontDoctor - we found it about equal. James Ellerbeck