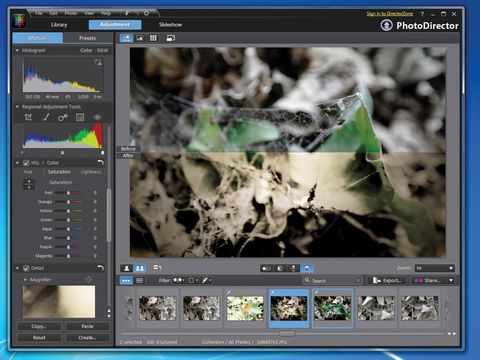 Cyberlink is best known for its video editing tools, including PowerDVD and PowerDirector. It's now turned its attention to photo editing with PhotoDirector 2011.

Will it be able to stand out in such a crowded market, and can Cyberlink apply its successful video editing formula to a new type of media?

When you start the software you'll find it looks similar to Cyberlink's video editor, with an attractive interface that helps you get started straight away. When we began using PhotoDirector 2011, the only photos imported were the example pictures that came with the program.

Our own photos didn't take long to find and import though, and we were impressed by how quickly they were added considering how many of them were taken at high resolutions.

You can browse imported photos in the Library, and search through them by the date they were imported, the number of stars you've awarded them, their folder, album or the tags that you've given them. You can also see metadata, which includes information like GPS location and camera model.

So far so good, but all these features can be found in free image sorting and editing software like Windows Live Photo Gallery. Once you start editing your photos, PhotoDirector proves its worth.

You can make adjustments to your photos via various sliders. As you move these, the photo is updated to show the effect. Each setting, like sharpness or saturation, is grouped with similar ones for ease of use.

This suite uses non-destructive editing, which means that no matter how much you tweak your photos, the original shot is always kept. A log of changes lets you review each change you've made to the photo in depth. You can also see side-by-side comparisons of your photo before and after editing, which gives you a good sense of how the photo is evolving.

We also appreciated the multi-monitor support, which lets you to view and edit photos over two screens.

We were pleased to see that one of PowerDirector's best features, the online DirectorZone that lets users share effects and presets, is included in PhotoDirector.

In some ways the DirectorZone works better for PhotoDirector, as the effects seem to be of a much higher standard. There are hundreds, if not thousands of these available, with more uploaded every day. Hovering over the thumbnail of an effect gives you an example of a photo before and after it's applied.

Microsoft's free Windows Live Photo Gallery can now handle RAW files, so has PhotoDirector 2011 been made redundant so soon after being launched? Having spent some time with the program, we'd say no – this is a great product for people who are getting to grips with editing their photos.