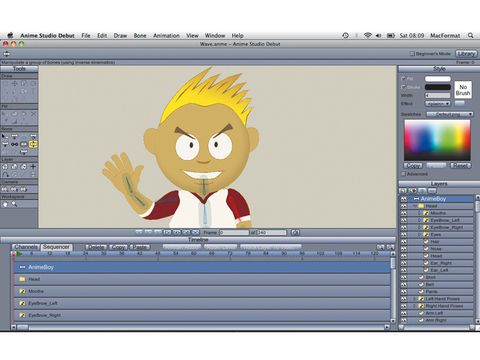 When we looked at version 6 of Anime Studio Debut back in August 2009, we concluded it packed a heck of a punch for such a value-driven application.

Not only was it relatively straightforward to use, but its excellent stock library, output options and first-rate tutorials and start files had us up and animating in minutes. The lone criticism we angled at it was that its interface was about as aesthetically pleasing as a bag of spanners.

So let's get the bad news out the way first: it's still ugly. Not just dull, grey and uninspiring. Straight ugly. Its fonts haven't been spruced in the slightest, the grey panels and palettes remain wholly unprofessional, and the interface in general sticks out from OS X's sleek surroundings like a sore thumb.

Fun is the word

The good news, however, is that it's still an utter joy to use. The drawing options remain unchanged, and it offers a quick and direct means of sketching out characters and elements.

New custom brushes are a nice touch, but hardly revolutionise this process. And a Beginners Mode enables you to quickly toggle between simple tool-tip driven dialogs and the full toolbox. What does make a difference to the creation process, however, is the introduction of the new masking function.

Anyone familiar with a basic image-editor will know what a chore masking image elements can be, and while the new Image Masking tool isn't on a par with Photoshop's, for instance, it can yield quick and usable results whenever the need arises. We found it worked best when applied to portraits, producing clever cut-outs with preset feathering to ease any harsh edges left.

Also welcome are the multiple improvements SmithMicro has made to the animating process. Here is where Debut can be more favourably compared to its professionally orientated spin-off, Anime Studio Pro 7.

The Follow Path tool works like Flash's motion tweens. Simply pick an object on the stage, create a path, and the object will follow that path. You can set individual speeds for each path, and even experiment with a degree of bend along the path, just like Flash.

The results are impressive, too, and had us quickly bouncing our character's hands in a clapping motion with just a few simple path selections. It's improvements like these that make up for the ugly interface.

The Bones tool, Switch Layers function and Animate Points haven't had any obvious upgrades, but all merit mention purely for their continued ease of use.

Elsewhere the Content Library has received something of a spruce up, though as in keeping with the rest of the interface, there's nothing to get excited about visually. You may now save your own character creations and objects directly to the library, and the new stock elements are – like version 6 – excellent.

As well as standard scenery, paths and characters, there are even more fully rigged characters to begin playing around with, as well as some excellent, thorough tutorials and start files, and a new Gather Media Function ensures no audio or image files go missing from your project folder.

New outputting options have also been added, including 780p and 1080p, as well as AVI, MOV and SWF.

Anime Studio 7 might look like a dog's dinner from afar, but get in close, poke around and its hidden gems rapidly rise to the surface.