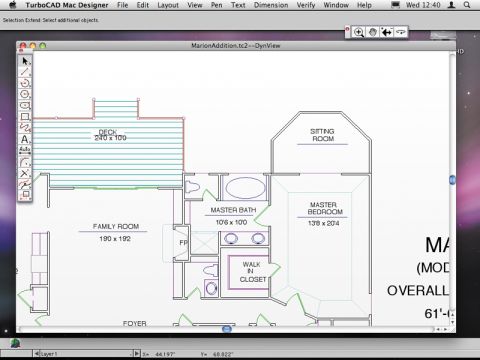 This is design software for the dedicated. Don't expect particularly speedy results

TurboCAD is a piece of software that attempts to straddle the great divide between your current design skills and the skills of a design professional.

Armed with TurboCAD, you can design practically anything in a 2D plane. Models for products, or hobbies, or even master plans for building work.

TurboCAD doesn't give you the structural engineering skills to make your sketches workable, but enables you to express your ideas in industry-standard terms.

Key features include 7,000 2D symbols that can be dropped onto plans, like doors, windows and construction points. 500 sample floor plans come in the box. You also get a complete set of drafting tools including line, arc, curve, ellipse and dimensioning tools.

We didn't like the clunky palettes that the tools sit in; they reminded us of Windows coding, but we felt our way around and managed to knock up some basic plans.

It's clear that you will need to give TurboCAD generous helpings of time if you hope to master it completely.

The file conversion tools were a big draw for us. An architect had already designed a loft extension for us, using VectorWorks and AutoCAD, that was ready to submit for permission.

We wanted software that could handle the .DWG files, which TurboCAD claimed to be able to do, but in fact we found it couldn't open them. It suggested we bought a new version of AutoCAD (£1,000), and presumably a PC to run it on.

With time and forethought, TurboCAD can help you create designs as starting points for more in-depth planning. Don't expect fast results though, and prepare for Windows-esque tool palettes.