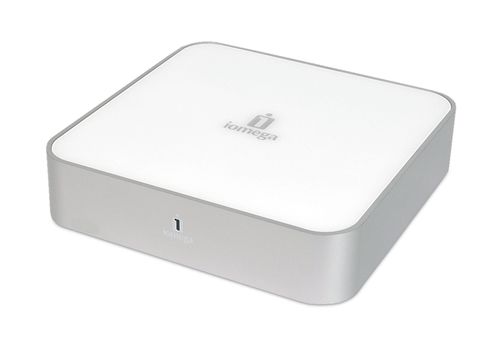 We can't help feeling a little sorry for Iomega. The Iomega MiniMax 1TB, the latest addition to its MiniMax range, was released just as Apple relaunched the Mac mini, making this 1TB desktop hard drive look a little dated as soon as it hit the shelves.

With its brushed aluminium walls and white polycarbonate top plate, the MiniMax is clearly designed to play nicely with the old-style Mac mini. At 16.5x16.5cm, it has an identical footprint too, but don't expect it to stack snugly under the wider, longer mid-2010 refresh.

Yet MiniMax 1TB has a lot to offer the Mac user, regardless of whether you own an old-style Mac mini. It has USB 2.0 and FireWire 800 ports, and there's a FW800-to-400 cable included in the box. A second FW800 port lets you daisy-chain another FireWire peripheral, and three extra USB ports let you use your hard drive as a hub.

Its capacious 1TB hard drive is preformatted for Mac OS, and a soft rubber base keeps it in place on your desk.

In our tests, the drive managed random read/write speeds of 17.8/28.9MB/s under FireWire 800 and 12.0/17.1MB/s using a USB connection, which is slightly faster than the eGo Desktop.

Although designed to match the outward appearance of the old-style Mac mini, the MiniMax's brushed aluminium and white polycarbonate bodywork looks good next to any reasonably modern Mac.

Its FireWire 800 through-port and integrated USB hub are useful extras, and it's very reasonably priced.