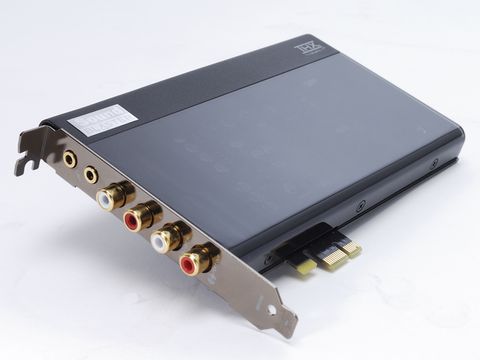 Is adding in a dedicated sound card needed anymore or are you better getting quality speakers?

Who does Creative have in mind for its new X-Fi Titanium HD soundcard? After all, it's been a long time since add-in sound cards were a must-have piece of kit for gaming. Thanks to the improved quality of on board sound, they're an optional extra for pretty much everyone these days.

As the best-known manufacturer of gaming sound cards, Creative dominated PC audio for a few years in the middle of the decade. So it had the most to lose as gamers adopted a more laissez-faire attitude to aural effects.

Creative wasn't helped by the fact that companies like Auzentech and Asus opened a second front against it by wooing away those who wanted hi-fi quality sound from their PC.

Creative's in-game effects engine, EAX, was being eclipsed by the more generic Dolby Surround standard, and at same time the Auzentech Prelude and Asus Xonars were attracting folk who knew and cared about SNRs, dynamic ranges and understood that sometimes you get better quality from a coat hanger than a £90 gold-plated cable.

Fortunately, Creative is not the kind of company to roll over and give up.

Its passionate defence of hardware acceleration when Microsoft dropped DirectSound from Vista may have led to more user confusion than any other technical argument in the history of PCs, but it certainly helped to keep sound cards selling.

Now it's fighting back in the other direction too. The Titanium HD is a makeover of its X-Fi sound card aimed at the dreaded bunch who would call themselves audiophile.