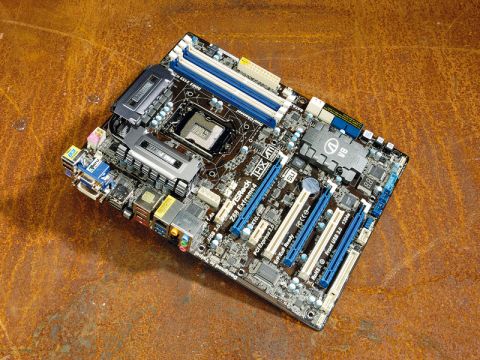 We've got two of ASRock's new boards based on this new chipset, the Z68 Pro3 and the fuller featured and newest edition to ASRock's extensive range of boards carrying the Extreme banner, the Z68 Extreme. This sits just under the Fatal1ty Z68 board in the family line-up.

Once everybody discovered the limitations of the Sandy Bridge's launch chipsets; namely the P67's lack of support for the new processor's integrated graphics but lots of overclocking potential and the H67's graphic support but no OC-ability, keen eyes were fixed on the Z68, the next enthusiast/mainstream 6 series chipset on Intel's roadmap.

The Z68 offers the best of both worlds with integrated graphics and overclocking support.

ASRock's Z68 Extreme 4 is a well designed and thought out board with plenty of room around the major components, including the CPU socket. So you can install quite a hefty third-party cooler (we used a Scythe Yasya in testing) without much problem.

While we're on the cooling front, the Z68 chip and the major power circuitry parts are all passively cooled by the board too. In terms of graphical expansion you're well catered for, you get three x16 PCI-e slots that support either CrossFire or SLI setups.

With a single card the top slot runs at full x16 speed but if you use two cards the speed for the top two slots drops to x8/x8 while a three card setup will see the bottom slot running at x4.

Unlike some board designers who create mobos for multi-card setups without considering the actual dimensions of today's monolithic GPU cards, ASRock has put some decent spacing in between the top and second slots.

There's also a full range of output options for the integrated graphics – unlike Gigabyte's GA-Z68XP-UD3-iSSD, which has a single, lonely HDMI output, – the Extreme 4 has DVI-D, VGA, HDMI ports and for good measure there's a DisplayPort port jammed in there as well.

The UEFI BIOS has plenty of OC settings and thanks to the new BIOS design you can use a mouse to select different settings. The Extreme 4 performs about as well as we've come to expect from standard Z68 boards: our 2600K happily hitting the 4.6GHz mark. That's no market leader, but it's not a bad mark up for a 3.4GHz CPU.

The Z68 Extreme 4 keeps up the tradition of good build quality, using first-rate components and stable performance that has come to represent ASRock boards in recent times and having reasonable price tag for a board sporting the latest hardware doesn't do it any harm either.