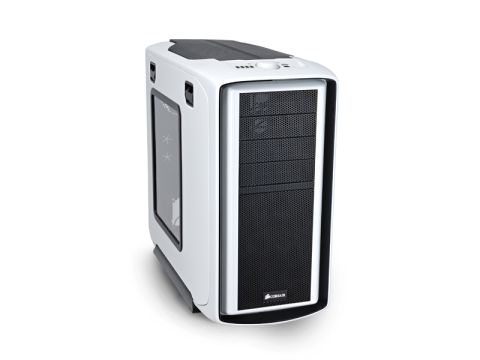 The Miss World of PC cases: beautiful, cool, empty inside and lacking literature

Corsair has a good thing going with its current range of cases. The cavernous Obsidian chassis are perfect abodes for your dream build, offering not just space but fantastic airflow, build quality and design. However, the price tags won't sit comfortably with thriftier gear-heads.

The Graphite series cases are by no means cheap, but their fantastic design and more affordable pricing offers great value.

When putting together a new machine, a case is often one of the areas people see as an opportunity to save money, along with optical drives and storage, to free up cash for CPU/GPU/RAM. After all, what can a £130 chassis do that a £50 one can't?

Often it's more a case of what it doesn't do, rather than any special features it sports. If a case doesn't cook your components, cut your hands open, make a lot of noise, and require a lot of fiddling to build a system inside, it's a good case. You can give it a well-earned pat on the front panel.

If, like the 600T Special Edition White chassis, it allows you to neatly tuck away the morass of cables spewing from your PSU, gives you a bit of elbow room for building, keeps everything cooler than room temperature at the Helsinki ghost convention, and maintains a beautiful and discrete aesthetic, it's a great case. Give it a cuddle.

The 600T in Ford model T black is a great looking case, and aside from the side window and the faster 200mm fans of this white edition, it's exactly the same. But the white edition is just a lot better.

For a start it looks like it was made by Aperture Science and should fit somewhere into an Audi R8. It's sartorial elegance in four panels, basically.

Those two 200mm fans at the top and front do a sterling job of heat dispersion. The rig we built inside reported ambient temperatures of around 31 degrees whilst idle, and that rig included a monstrous GTX 590 exhausting half its bodyheat back into the chassis.

It's impressive enough that overclockers might consider practising their dark magic with this case. We've already seen an i7 2600K clocked to a nice round 5GHz in this case courtesy of Dino PC's Evolution.

Now, let's talk space. There's easily enough room for the king-sized AMD 6 series 3D cards inside the chassis, as the (slightly flimsy) drive bays are kept well away from the motherboard. It's fundamental case design, but something many still get wrong.

However, the stratospherically huge MSI Big Bang Marshal motherboard won't fit in here – something to take into account if you're building a serious 4-way SLI/CrossFireX machine.

There's also some headscratching involved in connecting the case fans to the fan controller, thanks to some dummy Molex heads and a lack of a manual.It's a great case for connecting additional fans to the controller, but highlighted the absence of any setup guide.

For the demands of the gamer on a tight budget, this 600T white is almost perfect.