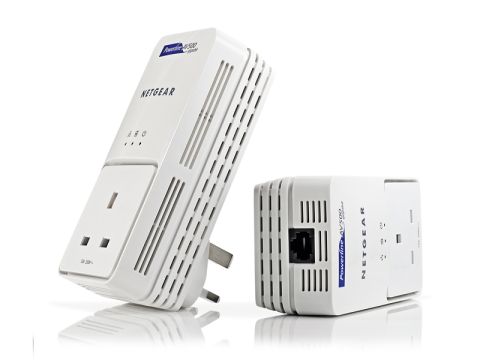 The biggest issues with sending data over your electrical wiring – a lack of speed and security – are neatly tied up in Netgear's bundle, which comprises two plugs and two Ethernet cables. Just plug them in and you've got a fast, secure home network instantly.

The pass-through design means you won't end up losing any of those vital plug sockets either, and one will happily sit behind your router or modem without causing too much interference. They're also the fastest we've seen so far – we managed to achieve a 1Gbps connection, although interference can affect how fast this actually is.

That 1Gbps speed shouldn't be overlooked – it's as fast as a conventional wired network, which means you no longer have to worry about CAT5 cables taking over your home.

The AV+ 500 is backwards compatible, so you can link it to existing Netgear powerline adapters, although it's not clear how this may affect the speed.

Security is the biggest concern with powerline networking, with hackers apparently able to snoop on your connection by connecting to your building's grid and 'listening' to the electrical frequencies. Netgear's hardware promises protection from the moment you plug it in, but also includes software for even stronger encryption.

Our only quibbles with the AV+ 500 are the price and the design. It looks like something that would be more at home in a 1980s office than a sleek modern home, but the nature of sockets means they're always going to be tucked away, so it doesn't matter too much.

You can pick up home networking kits for under £40, but they won't come close to Netgear's speeds. If you upgrade from Wi-Fi to the AV+ 500 you'll notice an immediate difference in performance, and it's the first true successor to a conventional wired home network.