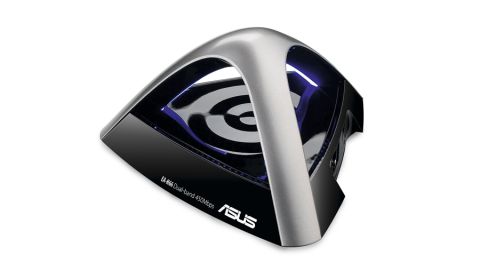 Excellent performance, future-proof 5GHz support and a tiny footprint make this perfect at what it does. Expensive though

We expect wireless access everywhere, and the Asus EA-N66 Ethernet Adaptor promises just that. Despite all the advances of wireless 802.11n, walls and distance still conspire to kill your router's reception dead.

Asus, like a knight of old, is here to rescue you like some long-haired damsel in distress, who is only capable of using her good looks to get out of a high tower.

The oddly-named, and odd-looking, EA-N66 Ethernet Adaptor is a tiny bespoke dual-band (that's 5GHz and 2.4GHz to you) wireless-N router, which is designed to work in one of three specific scenarios: as a repeater, as an adaptor or as a base station. High-speed access is helped by the single Gigabit Ethernet port, and the integrated orthogonal antenna is part of the crazy design, which makes it look like a prop from The Tripods.

Before you can use the Asus EA-N66 you need to configure via a laptop or desktop PC, but it doesn't get more complex than that.

We can't help but gush over the Asus EA-N66 - everything from the design and interface to the performance is pleasing. The initial setup is friendly and easy to follow. You need to hook it up to a computer of some description via the Ethernet cable, then use the browser interface to choose one of the illustrated scenarios that suits you, and you're more or less done.

Asus has successfully navigated that tricky balancing act of providing ease of use while still including some advanced settings.

As mentioned earlier, the unit functions in one of three modes: as an adaptor connecting a device to the wireless network, as a repeater, and as an access point/range extender at the end of a long Ethernet cable. The last two modes make the most sense for usage scenarios, as this would be an exorbitantly expensive Ethernet adaptor.

Another thing that surprised us was just how small the unit is, with its triangular base measuring around 120mm along each edge. The subtle but functional pulsing LEDs are a choice touch, although there's an option to turn them off if they annoy you.

At 5GHz in the same-room test, performance was excellent, nearly matching the outstanding Asus RT-N56U router we've reviewed previously. We weren't entirely surprised to see it outperform this at distance, largely because firmware updates will have improved throughput.

At 2.4GHz things were far more average, with connection speeds falling to 144Mbps. Upstream speeds were solidly mediocre at around 4.6MB/s.

From the simple installation to the clear web interface, Asus has gone out of its way to make the EA-N66 easy to use. This adaptor's small size and simple management tools mean you can deploy and forget about it, with basic management for schedule of use, wireless control with RADIUS and logging.

Even better, performance was excellent - especially at the 5GHz range. Its flexibility is the cherry on the pyramid. The EA-N66 is expensive for what it is though, costing as much as a standard dual-band router. A basic plug-in adaptor for a smart TV will cost you just £10. In its defence, the EA-N66 is more adaptable, but it only manages mediocre upstream speeds.