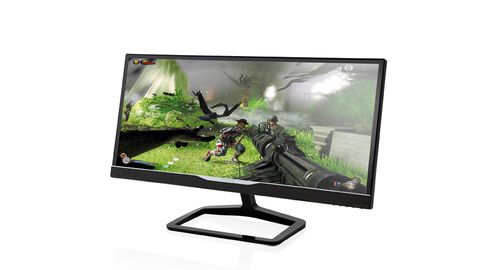 Stop that, it's silly. That's our first reaction to Philips' new 29-incher, the Brilliance 298X4QJAB, and we're not talking about the ridiculous product name. A thick alphanumeric naming soup is unfortunately par for the course for PC monitors.

No, what'll have you almost giggling on first acquaintance is the Philip's ridiculous 21:9 aspect ratio. That's normal for, say, a feature film, but it's outrageously wide for a PC display.

In terms of pixel grid, we're talking 2,560 by 1,080. In other words, you get the horizontal pixels of a high-res 27-inch or 30-inch panel combined with the vertical resolution of a standard 1080p screen. Weird.

Anyway, this is the first 21:9 monitor we've reviewed, but most major manufacturers have announced similar screens, so there must be something in it, right?

No question, this monitor is great for movies. There's something exceptionally satisfying about having a screen this wide filled corner-to-corner with feature film goodness. Suddenly, screens that leave you with letter boxing above and below look hopelessly clunky.

The problem, of course, is that content that isn't 21:9, like pretty much all TV shows, makes for letter boxing left and right. Whether that's better or worse than above and below is an interesting question, but it's certainly odd.

And then there's gaming. Does 21:9 makes sense in-game? It certainly lends games a cinematic air. Crysis 3 looks beyond spectacular at 2,560 by 1,080 on this bonkers-wide panel, but what it doesn't do is give you that wrap-around feel of a triple-screen setup with the two outside panels angled slightly towards you.

Gaming practicality is another legit question. When it comes to things like menus and HUDs, much will depend on configurability, but one thing is for sure: few if any games are optimised out of the box for this off-the-wall wideness.

It's also worth noting that the 1,080 vertical pixels feel pretty restrictive for things like web browsing. Okay, it works pretty well for side-to-side document viewing, but then you could have a pair of 1080p panels for less money.

Anyway, assuming you buy into the aspect ratio, what about the actual image quality? Firstly, this is a quality IPS panel, so things like overall colour balance and viewing angles are largely beyond reproach. It's also nicely calibrated for contrast and white balance out of the box, and there's bags of detail.

What it's not, however, is quite as crisp, clean and bright as the two high-res 27-inch IPS panels on test this month from Viewsonic and Iiyama. If you'd never seen those two, you would likely have few complaints about the image quality Philips has come up with. But we have, so we know that as nice as this Philips is, even better can be had.

And it is indeed those two 27-inchers that present the biggest problem. The Philips is wider and undoubtedly better for watching movies. But for everything else, 2,560 by 1,440 on a 27-inch panel is a superior all-round solution.

Admittedly, the 27-inch alternatives are both a bit pricier, but the Viewsonic VP2770-LED is only £50 more or thereabouts. For us, that's a margin well worth paying.