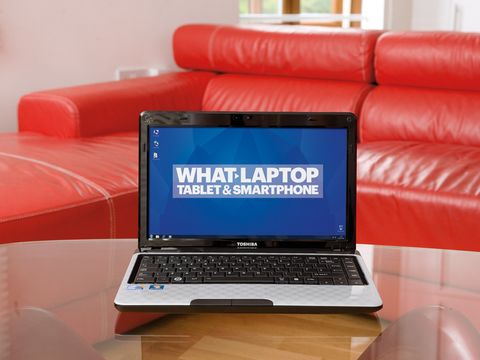 The touchpad on the Satellite L730-10G is level with the palmrests, but distinguished by a textured surface

This 13.3-inch entertainment laptop is perfect for staving off boredom on the move. The Satellite L730-10G lacks graphical punch, but the compact display is a highlight, while the lightweight body and decent battery life ensure you'll be entertained wherever you roam.

Despite its smaller screen, the Satellite L730-10G still features a 1366 x 768-pixel resolution. The result is a much sharper picture, so images look crisp and clean. It's also a bright and vibrant panel, making this one of the best displays for movie watching.

We enjoyed simply browsing our photo collection and watching films, although the integrated speakers are lacking in power. We recommend you invest in some decent headphones.

Most recent laptops use Intel's latest Sandy Bridge processing technology, but this portable is powered by one of Intel's older Core i3 processors. However, the difference in our benchmarking tests was minimal. If you love to multitask, browsing the web at the same time as you watch a film and chat with friends using messenger applications, then the Samsung can handle it.

Even with a paltry 2GB of memory on board, we witnessed little slowdown while running several tasks at once.

However, the integrated graphics are quite weak. This means that you can only run the most basic multimedia tasks such as viewing and editing photos, and watching high-definition (HD) films. If you want to mess around with your home movies or play games, you should look at the Acer Aspire 5750G and Lenovo ThinkPad Edge E520.

The 320GB hard drive provides a standard amount of storage space to carry around your files and media collection. It can hold hundreds of standard-definition films or thousands of albums and photos.

However, some other laptops offer double the space for a similar amount of you hard earned cash. If you need a laptop for the whole family, a larger hard drive is recommended. However, if you need a mobile machine for carrying around all day, the Satellite is a great solution.

With a weight of just 1.9kg, it is technically classed as an ultraportable laptop. Not only is it an extremely light machine, the battery life is also commendable. We watched movies for almost three hours before the laptop shut itself down, and limiting yourself to more basic entertainment such as browsing the web gives you many hours of life.You certainly won't need to lug the charger around on the daily commute.

The more compact body means that features are a little stingy compared to some of the other laptops here. If you want to hook up a television, you'll have to make do with a VGA connection, as there's no HDMI port.

There's also no memory card reader. However, one of the three USB ports supports sleep-and-charge technology, which means you can charge your mobile devices such as MP3 players even when the laptop is in hibernation.

You also get built-in hard drive protection, which pauses the drive if vibrations are detected. This reduces the risk of hard drive failure, which could result in lost files.

While the Toshiba may lack graphical power and lots of storage, it's still a good entertainment machine for regular travellers. The sharp and colourful screen is a good way of enjoying movies, while the reduced weight and decent battery life make it an excellent travel companion.