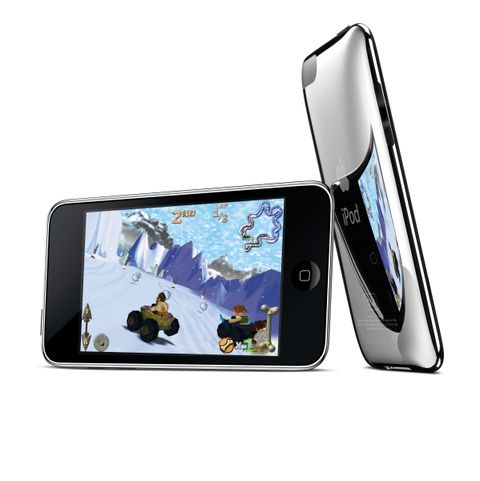 The new iPod touch - the 'funnest' iPod ever?

Packs more technology into a wafer-thin, contoured, sliver of stainless steel and glass than NASA used in building Apollo 13, and we love it

According to Apple the new iPod touch is the funniest iPod ever. Oh no, hang on, at second glance it actually says "funnest" iPod ever. Whatever next? The mind boggles.

Despite the liberties Apple is taking with the English language, we're forced to concede almost against our will, that it has a point: This is definitely the 'funnest' iPod ever.

With the introduction of hundreds of 3rd party apps the iPod touch isn't just a music and video player; it's a fully-fledged PDA/web browser/games console with an amazingly good screen, a revolutionary multi-touch control method and Wi-Fi internet access built-in.

All this technology is locked inside a ridiculously thin 8.5mm case with a gorgeous stainless steel back.

It's hard not to be convinced by the iPod touch's sleek looks and intuitive touch screen alone, but to complete this review we're going to have to remain strong, unbowed and not let Apple's flair for design blind us to the drawbacks of the new iPod touch, and there are a few.

Firstly, if you're already an iPod touch owner then there's no pressing need to upgrade. In the cold light of day the new iPod touch is basically the old iPod touch with a sexy new contoured back and a few iPhone bits and bobs, like a tiny speaker and volume buttons, bolted on.

Original iPod touch owners can even upgrade to the new version 2.1 of the software for £5.99 ($9.99) and get the new Genius playlists feature too (more on that later).

The new built-in speaker is nothing to shout about, and pretty poor quality for listening to music, but its main use is for the cheesy beeps and whistles used in games and other 3rd party applications, for which it's certainly adequate.

Maybe we're being a bit hard on Apple for not providing enough new features, and there are a couple we've overlooked so far.

The first is an improved battery life, which has increased to a claimed 36 hours audio and six hours for video in the new model. In our tests, the battery life did indeed match Apple's claims, but of course it did, because our review model was brand new, and we all know that the only way battery performance goes over time is downwards.

Check back with us in a year and we'll tell you how it's performing then, or rather we would if Apple didn't want our review model back in 30-days time.

Oh, and there's also built-in support for the Nike + iPod running kit. This means that all you need to do is insert a Nike + iPod sensor into your trainers and start jogging and the iPod touch will record your running habits – like how many calories you've burned off, and how far you've run.

It even makes it all into a nice graph for you, so you can track your progress over time. The only problem with this is that having something as expensive as the iPod touch strapped to your arm, or even worse, bouncing about in your pocket as you jog down the street is the last thing you'd want to do.

Jogging with an iPod touch along the war-torn streets of the UK's inner cities sounds more akin to pasting a large sign saying "Mug me, I've got a £300 iPod" to your back.

Even if you're lucky enough to live in the genteel countryside, the iPod touch is still too bulky for jogging purposes. The smaller and cheaper iPod nano, which can also work with the Nike + iPod kit, is a much better fit.

But in reality nobody is going to buy an iPod touch because they think they're saving the planet. Nobody even knows what Brominate is (it's a chemical flame retardent applied to stop electronics, clothes and furniture catching fire -Ed), let alone why you'd want to be free of it.

You're going to buy it because it's the funnest iPod ever, oh yes. Just think about what this iPod can do: You can listen to music and play videos in iPod mode, watch YouTube videos and movies, download and play games from the App store, browse the internet over Wi-Fi using Safari and also get your email, buy music from the iTunes Store, utilise Google Maps (there's no GPS location detection though), browse photos (but there's no built-in camera) and install 3rd party apps that do just about everything else.

It's really the third party apps, and in particular the games that clinch the deal for us. The iPod touch is quite simply a brilliant gaming platform. Why? Let's start with the screen. It's gorgeous, and large.

It's a whopping 3.5 inches on the diagonal with 480 x 320 pixel resolution and bright and vibrant colours. Then add in the fact that it's a touch screen, and there's a built-in accelerometer, which enables you to control games by simply tilting the iPod in your hand and you've got a recipe for gaming nirvana of Nintendo Wii-sized proportions.

What's more, there's no shortage of great games available (784 as we were writing this), all of which can be purchased and downloaded on the device or your home computer using Apple's App Store.

Even the good games are pretty cheap – somewhere in the £6 region, and there are also plenty of fun ones to be had for free. Hot titles to try out are SuperMonkey Ball by SEGA (£5.99) and Cro-Mag Rally from Pangea Software (reduced to just £1.19 at time of writing), and there's more on the way like Need for Speed.

Videos and movies, whether purchased legitimately from Apple's iTunes Store, or otherwise 'acquired', look exceptionally good on the iPod touch.

Even the BBC's iPlayer connected using the Wi-Fi networking capabilities plays like a dream. There's nothing really new in iPod mode from the previous version of the touch though, except for the Genius feature. Genius creates playlists based on a single song you select from your music library and contains songs that Apple thinks would go well with it.

Genius playlists can be created and saved on the iPod touch without having to do anything on your computer. As a song is playing you just tap the iPod's screen, then tap the Genius button to create the playlist. It's actually a really nice feature, and Apple has obviously put a lot of work into the recommendation software, because it does a very good job.

The final new feature that is tucked away in the iPod touch is the ability to record audio, so long as you purchase one of Apple's new earphones with a built-in mic.

This couldn't be done on the old iPod touch. There are plenty of 3rd party apps on the App Store that will record audio and save it, such as the free Ecco Note Lite, so you'll just need to download one of them.

The real news here though is that this tentatively opens the door to a VOIP application on the touch, without having to hack into Apple's software. All we need now is for somebody like Skype to release an iPod touch app and we're there.

The first generation iPod touch seemed unnecessarily basic, like an iPhone ruthlessly stripped back to the bone. This second generation effort feels much more like a finished product. It oozes design flair, bustles with features and finally, at 32GB, has a decent memory size. And for that we can even forgive Apple many things, including making up words like "funnest".