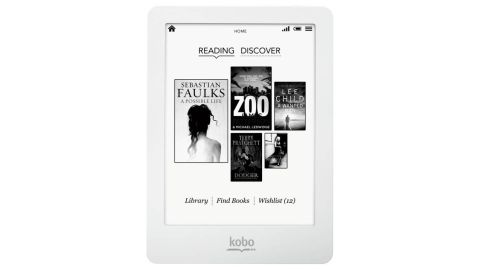 It may sound like something to do with discrete illumination in a toilet bowl, but the ComfortLight on the Kobo Glo brings the e-reader bang up to date.

In fact, with the arrival of the Kindle Paperwhite, it seems that Amazon thinks that backlighting is really the only way to sell e-readers. Barnes & Noble is following suit by selling the Nook SimpleTouch GlowLight.

However, the Kobo Glo's touchscreen operation and user-friendly interface proves just as crucial as its backlighting. It certainly enables a cleaner design than we've seen previously.

The Kobo Glo's reliance on on-screen controls leaves the e-reader's body smooth and free from any nonsense save for an underslung micro USB slot, and a super-subtle on/off toggle switch for that ComfortLight on top.

The follow-up to the Kobo eReader Touch, released alongside the Kobo Mini, the six-inch Kobo Glo has a depth of 10mm (0.4 inches), a resolution of 1024 x 768 pixels and a 16-level grayscale, with a rated battery life of two weeks - as long as its Wi-Fi antennae is switched off.

That makes it a decent candidate for taking on long trips, though the ComfortLight backlighting feature is aimed largely at home users not wanting to have to sit near a lamp.

Others will wonder what the point is of an e-ink screen with backlighting. After all, aren't e-reader owners constantly grappling with the temptation of buying a tablet instead, but not doing so because they want to avoid the glare of the LCD backlight?

Priced at £99.99/AU$159.99/US$129.99, the Kobo Glo is significantly cheaper than a tablet, and around the same price as the Kindle Paperwhite and Nook Simple Touch GlowLight.

Don't dwell on whether e-ink screens with backlighting have lost their point of differentiation with tablets because, in practice, that argument doesn't stand up.

The LEDs themselves are positioned at the bottom of the device and let loose their light across the screen much as an edge LED-backlit LCD TV does, although the e-ink pearl panel used by the Kobo Glo ensures that the light is streak-free and totally even.

Out of the box it's set far too bright, but it's possible to take it right down to just a slight illumination, which is more suited to a blackout.

As you move the brightness slider, the levels visibly dim or strengthen with even the slightest of touches, though our fingers proved too clumsy to find more than about 15 separate levels.

Kobo also claims that the ComfortLight doesn't use any discernible battery life, staying with the two-week figure whether or not you read in the dark.

In fact, there's only one thing wrong with the Kobo Glo's ComfortLight, and that's its on/off switch, which is just too small.

We had no specific problem activating the backlighting, but it does entail gripping the Kobo Glo with two hands to get enough purchase to press down as precisely as is needed.

Touching the screen while reading turns pages swiftly in either direction. A touch of the middle third of the screen initiates most of the Kobo Glo's book functions, including returning to the home menu, highlighting passages of text or fiddling with the screen's settings.

The latter is lavishly comprehensive, with a choice between seven fonts and 24 font sizes and their exact weight and sharpness (it all makes a big difference), while the home menu has plenty of options, too.

An icon-based user interface strewn by book covers is divvied up between portions headed Reading and Discover. The latter is all about Kobo using your habits to recommend content in its bookstore.

That may sound unwanted, but it's actually the opposite, since without it Kobo's online store can be a pain to negotiate.

That's partly because pages appear to be slow to load via Wi-Fi, but in truth the Kobo store suffers from the same problem as its Kindle rival - it can't show more than a fraction of its contents on a single page, and those pages take a second or so to flip.

At least Kobo's store is split up into genres, with themed lists - such as a section dedicated to the Booker Prize nominees for 2012 - easily accessible.

Meanwhile, the Reading section details the contents of the Kobo Glo, a shortcut to the Kobo store, and something called Reading Life, which collects Tweet-able statistics on your wordly achievements.

About 1,000 ebooks and files can be packed into the Kobo Glo's 2GB storage in any of the EPUB, PDF, JPEG, GIF, PNG, TIFF, TXT, HTML, RFT CBZ and CBR formats.

No MOBI, then, though the fact that EPUB files (even those locked by Adobe Digital Editions) can be transferred to the Kobo Glo makes this a very different beast to the Kindle Paperwhite. It means you can buy or download EPUB books from anywhere on the internet, and not just from Kobo.

However, other niceties of the Kindle are lacking, particularly the computer-less online syncing.

Although we got a couple of different Kobo e-readers to sync page numbers with each other as we read the same book on each, it's not possible to email documents to a Kobo account and watch things download to the device.

It means having to use a computer, even if just occasionally, to load up the Kobo Glo, though straying from the Kobo store - just like that ComfortLight - is entirely optional.