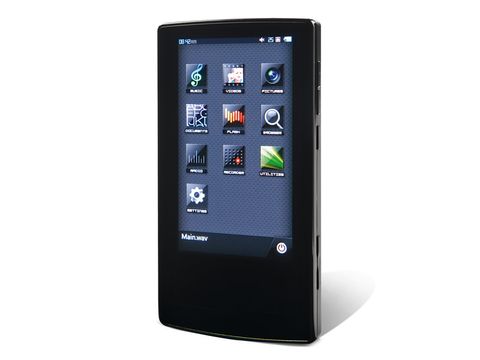 An impressive player offering sounds not far short of those from 'real' hi-fi, with smart looks and pleasing operation

The Cowon J3 is a considerably more fancy player than the Cowon i9 and offers much greater capacity (an 8GB model costs £165). What’s more, it includes a micro-SDHC slot so you can add up to a further 32GB of removable storage, a highly appealing prospect from many points of view.

The basic feature set is similar to the i9, in fact, including FM radio and voice recording (at selectable bitrates, in this case), but adds line input recording – though this requires an optional extra cable.

Size strikes us as very well-judged for such a device, with a display large enough to show pictures that can be viewed without a microscope, but overall dimensions that will fit easily in a pocket.

The display is touch-sensitive (though not multi-touch) and operation is particularly pleasant and largely intuitive. Again, computer connection (via a special USB cable to Cowon’s multipurpose docking connector) requires reboot to set up, but is subsequently easy and fuss-free.

The J3 is admirably quick to wake up on switch-on. The main difference from the i9 in sonic terms seems to be that the J3 has rather less output, enough to drive most low-impedance headphones to potentially unsafe levels but not quite enough for satisfying sound from high-impedance cans.

However, it does seem to have a little more subtlety and finesse to it, with greater precision particularly in the bass. Indeed, with good-quality headphones (again, the supplied ones will get you going but aren’t marvellous) the combination of drive, extension and detail in the lower octaves is really very fine.

Only in the highest treble is the sound occasionally a little dry.