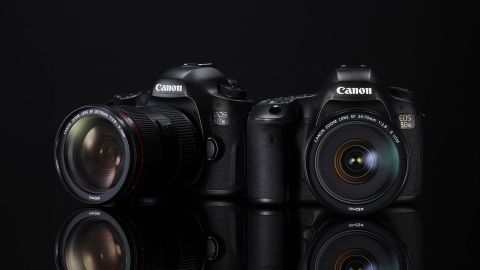 The Canon 5DS and 5DS R are superb cameras that resolve a huge amount of detail, beating even 50Mp medium format cameras. A new benchmark has been set. Before you commit to the investment, however, make sure that you have lenses that can match the camera.

Canon's 5D line of DSLRs has been an important one, bridging the gap between professional and amateur photography, giving enthusiasts an affordable route to full-frame shooting and pros a smaller, lighter camera to back-up their fully professional-level model. It is also the line that kickstarted the whole DSLR video thing, with many film makers choosing to use the 5D Mark II and then the 5D Mark III.

Now we have the 5DS and 5DS R, both of which have 50.6 million effective pixels on their full-frame sensor. Neither is set to replace the 5D Mark III; they are designed to give a higher resolution alternative to the more general-purpose older camera.

The benefit of having a high resolution sensor is that, provided noise can be controlled, it enables the camera to capture more detail and for images to be printed at larger sizes. At 300ppi, for example the 5DS's 50Mp images measure 73.56 x 49.04cm or 28.96 x 19.31inches. The downside, however, is that the photoreceptors (often called pixels) on the sensor have to be made smaller than on lower resolution sensors and this means they produce a weaker image signal that requires greater amplification. This can be a recipe for low dynamic range and lots of noise, so camera engineers have their work cut out to produce high quality images.

Another issue with having a high pixel count is that each image demands a lot of processing power and this can slow continuous shooting rates and reduce burst depths. Canon has addressed this by giving the 5DS and 5DS R dual Digic 6 processing engines.

As high resolution cameras produce large files, memory cards fill up quickly, image transfer times increase and hard drive capacity is eaten up as images are downloaded. Full resolution Canon 5DS raw files are around 52-82MB and the JPEGS are 10-29MB. You may also find that your computer isn't able to render thumbnails or process images as quickly as it does more standard resolution images. If your computer is already struggling it's maybe time to upgrade, adding extra cost to the purchase of a 5DS. You may also need to buy better lenses to match the camera's resolving power.

As the 5DS and 5DS R are identical apart from a small but significant difference with the sensor, unless otherwise stated, we'll use the 5DS model name to refer to the 5DS R too.

The difference between the two cameras is that the 5DS R is designed to get more detail out the 35 x 24mm 50.6-megapixel CMOS sensor. Both the cameras have a low pass filter over the sensor, but the 5DS R has a secondary 'cancellation' filter that that enables it to resolve a little more detail. It's an alternative approach to the one we have seen with manufacturers such as Nikon and Sony that have removed the low pass filter to achieve the same thing. Canon claims that removing the filter would alter the camera's focal plane and require an internal redesign. As yet Canon hasn't been able (or willing) to explain why removing the filter would cause this, but adding a second filter does not.

A low pass filter is used over a sensor to reduce the risk of moire patterning by slightly softening the image. Hence removing or cancelling the effect of the filter makes it possible to resolve more detail, but brings increased risk of interference patterns when shooting fine repeating patterns. With very high resolution sensors this interference is less common and only likely with extremely fine patterns.

Like other Canon DSLRs, the 5DS has a collection of Picture Styles that tailor the look of JPEGs, setting the saturation, contrast and sharpening to suit the subject. The 5DS, however, has a new one called 'Fine Detail'. This seems a sensible introduction given that the 5DS is likely to be used to shoot landscape, still life and macro subjects. With this in mind, the new camera also has a collection of mirror lock-up options which trip the shutter after a set delay following the shutter release being pressed (and the mirror lifting). These are accessible via the menu along with the standard option that requires two presses of the shutter release. It would be nice if Canon took a leaf out of Fuji's book with a firmware update that rolled out this capability to the 5D Mark III.

While the 5D Mark III has a headphone socket, this is missing from the 5DS, making the older camera better suited to serious video shooting. However, the new camera has an intervalometer built in as well as the ability to shoot timelapse movies which are merged in-camera.

Wi-Fi connectivity is notable by its absence, although there is an optional Wireless File Transmitter add-on.